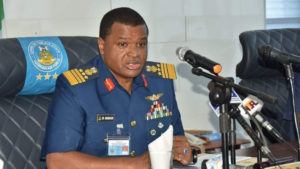 NAF Director of Public Relations and Information, Air Commodore Ibikunle Daramola, made this known in a statement made available  to newsmen in Abuja.

“The medical intervention, which began July 30, is designed to bring succour to villagers who were displaced by the activities of bandits prior to the commencement of the ongoing dialogue between the Zamfara Government and the bandits,” he said.

Daramola said the humanitarian initiative was in furtherance of the directive by the Chief of the Air Staff (CAS), Air Marshal Sadique Abubakar, for the NAF Medical Services Branch to provide immediate medical assistance to residents of Kanoma and adjoining communities in Maru LGA.

He said Mr Bala Moru, the Secretary to Zamfara Government, who represented Governor Bello Matawale, thanked NAF for the kind gesture in assuaging the plight of the people.

Matawale said that the Zamfara State Government was happy with the initiative.

Daramola quoted Matawale as saying that as part of ongoing negotiation with the bandits, more than 200 persons in the hands of the bandits had been released.

The governor added that efforts were ongoing to secure the release of the remaining captives.

Daramola said the first day of the medical outreach witnessed a large turnout of villagers who were treated for different medical conditions.

He said the beneficiaries, who were elated by the gesture, expressed appreciation to NAF for the services provided by the Medical Team.

Daramola said Group Captain Ali Tanko, the leader of the NAF Medical Team and Director of Public Health and Humanitarian Services, Headquarters NAF, said that the Team would remain in the area to provide medical services to about 3,000 patients.

Tanko said those requiring basic surgeries would be operated upon.

He said other services to be rendered were visual acuity checks, de-worming of children and distribution of prescription eye glasses to about 1,000 persons from the benefiting communities.