The Plateau State Commissioner for Health, Dr Nimkong Ndam, has revealed that the state’s HIV prevalence rate has dropped to 1.6 percent.

He made the disclosure in Jos, the state capital at a news conference to commemorate the World Aids day.

According to him, the 1.6 prevalence rate was based on the NAIIS survey of 2018, which shows that the state had recorded a decline from the initial rate of 5.9 per cent prevalence. 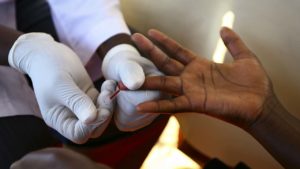 The commissioner that the state is very proactive in achieving a zero per cent prevalence rate and as such the 2020 health budget had  the sum of N300 million naira captured  for services related to HIV and Aids.

He said this was the first time a budget for HIV and Aids was made. Ndam described the theme for this year as very apt, as communities played strong advocacy and such advocacy was needed to ensure that AIDS remained on the political agenda.

He, however, stressed that the state was still being faced with the challenge of unmet needs for commodities and data quality in respect to HIV and AIDS.

He said that there is need for the government to increase investment in health care delivery and for health workers to optimise their response strategies.

Earlier, the Plateau Assembly House Chairman of Committee on Health, Mr Daniel Nanbol, noted that the committee had the responsibility of advocating better funding for the health sector, as funding in the sector was not adequate.

He also said that the committee would domesticate , a legal framework that would mandate all blood transfusion centers to  have laboratories that had P24 machines which ascertained the blood in the blood banks were safe for transfusion.

Newsmen reports that most civil society groups in Jos-Bukuru metropolis are carrying out free screening to enable people to know their status.