National President of the NMA, Dr Francis Faduyile, said that Shagari’s tenure as president had impacted positively, especially in the health sector, where he instituted welfare-driven policies. 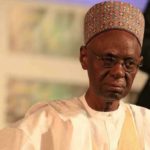 He said that NMA and the entire body of the Medical and Dental Practitioners nationwide expressed condolences to the family of the
former President.

“We commiserate with President Muhammadu Buhari, the family of former President Shehu Shagari, the good people of Sokoto State and the
generality of Nigerians on the demise of the revered leader,” Faduyile said.