The Niger Delta Development Commission (NDDC) has donated three ambulances, protective kits and drugs to the Ondo Government to fight outbreak of Lassa fever in the state.

NDDC’s Coordinator in Ondo, Mr Lucky Aiyedatiwa, presented the gifts to health officials in Ondo, according to a statement by commission’s Director of Corporate Affairs, Mr Charles Odili, on Sunday in Port Harcourt. 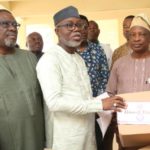 Aiyedatiwa said the commission had responsibility to assist governments of the Niger Delta region to provide infrastructure and programmes to improve the wellbeing of the people.

“The donation is part of the commission’s interventions to stamp out Lassa fever in Ondo through the provision of healthcare facilities for the wellbeing of the people.

“In addition to supporting the government and people of Ondo, NDDC will be conducting sensitisation and advocacy programmes against the deadly disease,” he said.

Receiving the donations, the state Commissioner for Health, Dr Wahab Adegbenro, thanked the commission for its interventions in the state.

He said the items would go a long way in helping the state government to treat patients diagnosed with the ailment.

“Lassa fever has become an endemic disease in Ondo for some time now. So, the intervention came at the right time, especially as the cost of treatment is very high.

“Treatment is quite expensive as it cost an average about N1.6 million to treat a single case of Lassa fever.

“We are calling on the public and healthcare practitioners to take precautionary measures always while providing care to people infected with Lassa fever virus,” he appealed.

The commissioner said the ambulances would help the state government to take the fight against the deadly disease to rural communities through quick response to people in distress.