1 out of 5 Ebola infections hits a child 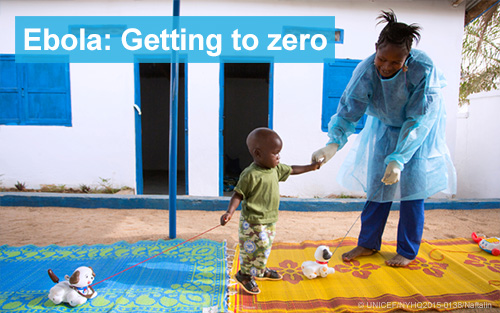 Ebola has had a devastating impact on children, who make up about 20 per cent of infections in Guinea, Liberia and Sierra Leone. To protect them and their communities, it is critical to defeat this scourge, while working to restore basic services, UNICEF said in a report released today. (17th March 2015)

“The outbreak will not be over until there are zero cases, and every single contact has been traced and monitored. We cannot afford to let our guard down,” said Barbara Bentein, UNICEF’s Global Emergency Coordinator for Ebola. “At the same time, basic services need to be re-established safely and responsibly, using the assets of the response.”

The report looks at the dramatic impact Ebola has had on children as it hit some of the most vulnerable communities in some of the world’s most vulnerable countries. Of the more than 24,000 people infected, some 5,000 are children, while more than 16,000 children have lost one or both parents or their primary caregiver. And, for many of the 9 million children living in affected areas, Ebola has been terrifying. These children have seen death and suffering beyond their comprehension.

The report also points to the central role communities are playing in the response and shows encouraging trends in safe behaviours. In Liberia, for example, a survey indicates that 72 per cent of people believe anyone with Ebola symptoms will get better care at a treatment centre, which is significant because many used to keep Ebola victims at home, spreading infection in the community.

While participating in the Ebola response, UNICEF and its partners have immunized thousands of children against other deadly diseases like measles, strengthened primary health care services, and helped minimize the risk of Ebola infections when schools reopened following months of closures that left 5 million children out of school.

In the longer-term, investing in improving health care systems in Ebola affected countries will help tackle other diseases such as measles, pneumonia and diarrhoea, which take a heavy toll on children. Planning for longer-term recovery must draw on gains made during the response, to build back better and address historical inequities, the report said.

Leaders commit to advancements in Dementia Research and Care