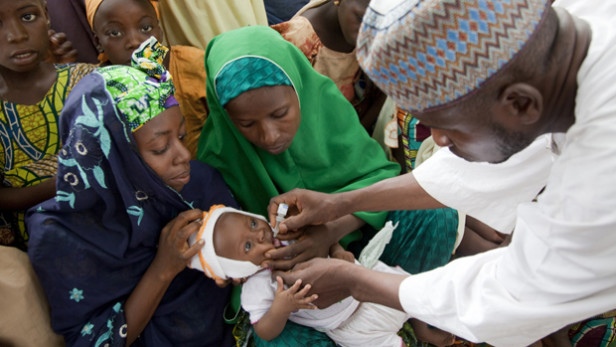 Getting the general public to care about international development isn’t easy, even for an institution as recognizable as the Bill & Melinda Gates Foundation.

When Christine McNab, a global health communications consultant, approached the Gates Foundation with the idea for an advocacy campaign focused on immunization, she knew it would need to be unique and compelling enough to garner widespread attention. The result was “The Art of Saving a Life,” a Gates-sponsored publicity effort around vaccinating children in the developing world that launched with a splash earlier this month.

The online campaign will ultimately feature more than 30 pieces of art that demonstrate the impact of vaccines, showcasing the work of contributors like iconic photographer Annie Leibovitz and Nigerian author Chimamanda Ngozi Adichie. The project was timed to draw attention to today’s pledging conference of Gavi, the Vaccine Alliance, which reached its target of raising $7.5 billion in contributions to immunize 300 million children over five years.

Since its start, the Gates Foundation has committed billions to vaccine delivery programs, and its founders highlighted the importance of vaccines in their annual letter last week.

McNab, who formerly led communications at the World Health Organization and has worked with the Gates Foundation on immunization campaigns in Africa, spoke with Devex about how to create a high-profile advocacy campaign. Here are some of her tips on messaging that resonates with a mainstream audience.

Global health advocacy campaigns risk failing to break through to an audience beyond the insiders already working on niche issues like immunization and disease.

The key to mass appeal? Given how much information exists online, McNab recommended finding a message that taps into people’s emotions. Bringing together prominent artists to create work about vaccines was one way to do that, McNab said, since art is something that makes people feel regardless of their backgrounds.

Last year, a campaign Save the Children built around a one-minute video depicting the impact of war on a young British girl was particularly effective, McNab noted. The video’s message was both affecting and unique, she said, a departure from marketing that often highlights simplistic “success stories” showing how people in the developing world benefit from aid.

Language matters in framing a campaign, and McNab was particularly pleased that the New York Times, in its recent coverage, clearly tied the vaccination campaign to the Gavi meeting, linking the benefits of vaccines to an event where global leaders decide funding priorities.

“This is what I’d hoped for,” McNab said, “that the project would penetrate into different types of media and extend to people who normally don’t think about vaccines.”

Lining up big-name supporters for “The Art of Saving a Life” proved easier than McNab expected. The first step was to create a wish list of artists and public figures, and the foundation sent personalized invitations inviting potential contributors to lend their talents to the campaign.

The Gates Foundation’s credibility as a leading force in global development and advocacy helped to convince people to sign on, McNab suggested, since they knew that the effort would be very well-publicized. Photographer Vik Muniz, actress Mia Farrow and the pop group Yegna were among the partners who agreed to let their work appear as part of the campaign.

Establishing clear objectives about what a communications effort should achieve is crucial, both to get the impact you want and to convince higher-ups that marketing is worth the cost and effort.

“The Gates Foundation has worked really hard on the metrics,” McNab said, noting that the foundation has analysts monitoring news coverage and social media conversation around “The Art of Saving a Life.”

Understanding what works and what doesn’t is especially important when it comes to campaigns about programs that benefit the world’s poor, McNab added. Studies have shown that the public in developed countries tends to think their governments spend more on international aid than they actually do, and advocacy can set the record straight and communicate the value of combatting disease or immunizing children abroad.

One key metric the Gates Foundation identified for this campaign was the use of the hashtag #VaccinesWork, which offered a way to monitor the conversation at a global level.

“Having a really clear hashtag is a simple way that you can measure how far these conversations are spreading,” McNab said.

The foundation made sure the project’s homepage could serve as a hub for viewing the artists’ contributions and for explaining the project’s goals and scope. It was also important that each individual piece of art could be easily shared via social media, with clickable buttons to easily post on Facebook or Twitter.

“The fact that we will have almost 40 pieces of art that you can share out and have out in the world really quickly through social media seemed really inviting,” McNab said.