The Adamawa State Government said 1, 685 personnel are involved in the house-to-house polio immunisation in the 226 wards in the state.

The state Deputy Governor and Chairman of the Taskforce on Immunization, Mr Martins Babale, made this known while launching the 2019 3rd round Polio immunization campaign in Wauru-Jabbe ward of Yola South Local Government Area of the state. 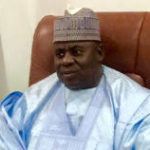 Babale said that over one million children below the age of five were expected to be vaccinated in the five-day exercise and that enough doses had been made available for the exercise.

He said the state had been recording steady success in the exercise, adding that from 56 per cent coverage in 2017, the state had risen to 81 per cent in the first quarter of 2019.

While attributing the success to State Emergency Routine Immunization Centre (SERICC) supported by Saving One Million Lives (SOML) programme, Babale called for sustained efforts and formulation of additional strategies that could ensure all children in the state were vaccinated.

Babale who urged parents to present their children for immunization said that he would monitor the exercise to ensure success.

“I will be monitoring the progress of the exercise through supervision and daily reports from the commissioner.

“I will ensure that the Taskforce leads all campaigns to sustain the sensitization until victory is attained and polio is eradicated from our land.

“Please join me and other stakeholders to fight this battle.

“I am sure with your support, the victory we seek will be delivered and the next generation of Adamawa children will thank all of us for a brighter and rewarding future that is polio-free and not encumbered with disabilities,” Babale said.

In their respective remarks, the Adamawa Commissioner for Health, Dr Fatima Atiku, and the Chairman Adamawa State Primary Healthcare Development Agency, Dr Batulu Mohammed, who spoke on the importance of vaccines, said it was the best thing parents could give to their children.

They raised concern over lack of serious improvement in Yola South Local Government which necessitated the launch in the area and charged health officials in the area to sit up in addressing the development.

Mr Felix Bodi who spoke on behalf of development partners, noted that Adamawa had not recorded any suspicious case and that the commitment of all was needed to sustain the tempo.

He assured the commitment of the partners to continue to support Adamawa to succeed.

Highlights of the occasion was the administering of polio doses to some children by the Deputy Governor supported by other dignitaries.

Of Medical Tourism, Doctors Brain Drain and the Economics of Health Care a Response to Mr President’s Challenge – Part One

Role of PSC critical to success of Nigeria’s...

NACA calls for funding of survey, fight against...