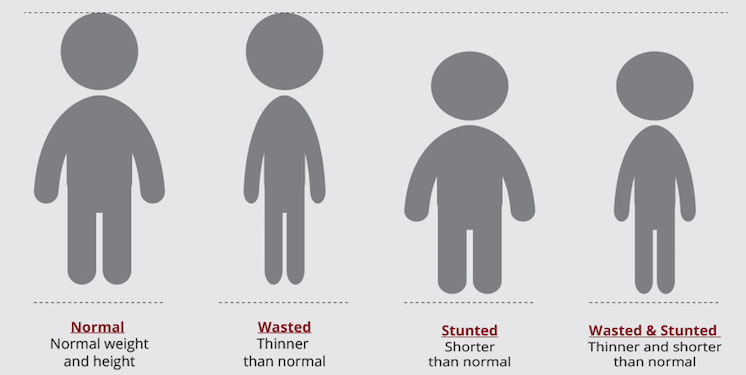 Most people are unmindful of the connections between nutrition and physical growth of their children, especially in Africa, heath experts have observed.

According to them, it sometimes seems insignificant when people see stunted children being called names and it stops at that.

They have also predicted that with this unawareness, poverty and other issues such as climate change, among others, stunting may be pronounced in newborns or older babies becoming retarded in growth because of poor nutrition unless the government and stakeholders are proactive.

According to him, inadequate food intake affects not only physical growth, but also other processes such as brain development and immune system function.

“Stunting is one of the most common methods for determining whether or not a child is malnourished,” he observed.

Orimadegun solicits in research by the Global Exemplars in Stunting Reduction and Countdown to 2030 Nigeria Country Case Studies, that a child’s growth potential has been stifled as a result of disease, poor health, or starvation.

“If a youngster is too short for his or her age, they are considered stunted. In spite of that, stunting is used as a public health indicator of malnutrition, it lacks the sensitivity and specificity required to provide a credible explanation for its cause.

“This necessitates a diet rich in a variety of nutrients, including those found in breast milk, fruits, vegetables, grains and other plant-based foods as well as foods derived from animals such as dairy, eggs, fish and meat,’’ he says.

He notes further that in spite of remarkable Gross Domestic Product (GDP) growth, Nigeria made modest progress in stunting reduction between 1990 and 2018, compared to the performance of some other countries studied, including Senegal, Burkina Faso, Ghana, Peru, and Uganda, indicating an opportunity to improve through evidence-based incremental investments in intervention programmes.

He observes that the states that have achieved more than a 0.8 per cent average annual rate of change in stunting reduction are Benue, Nasarawa State, Kogi, Kwara, Niger and Plateau in the northern part of the country and Akwa Ibom, Edo, Delta, Ebonyi, Ondo State, Osun, Ekiti, Ogun and Rivers in the southern part of the country.

Orimadegun advocates that in infancy, promotion of breastfeeding and appropriate complementary feeding should be intensified.

“Nutritional gaps may be filled by specifically formulated foods that are not accessible, for example, due to cost constraints or not available.

“Adding a little amount of a micronutrient powder or lipid-based supplement to home-prepared foods provides necessary nutrients that are not available at enough levels in the current diet.

“This technique is a viable strategy. Another alternative is to introduce specially formulated complementary foods, such as bean porridge, into a young infant’s diet.

“Those who cannot afford to buy these things may have to be helped by social safety nets,” Orimadegun advised.

In his view, Professor Ayodele Jegede, an investigator in the Department of Sociology and Director of Research Management, University of Ibadan, cautions that household agents like mother-in-law, house-help and relations who assist in child rearing, contribute to child stunting.

Other causes include high cost of food, negative impact of improper diet, maternal characteristics such as uncontrolled births, he observes.

According to Jegede, the government should sustain and improve on the current level of political will and invest in data generation to monitor the progress of child stunting.

“The government should also facilitate the improvement in the indirect non-health sector by addressing the problem of food insecurity and living conditions.

But the Minister of State for Health, Dr Olorunnimbe Mamora, says the country made about a 7-point drop-in stunting rate from 43.1 per cent in 1990 to 37 per cent in 2018.

“Going by our resolve to leave no one behind, this rate is definitely not acceptable. Our commitment to achieve universal health coverage puts on us the responsibility to redouble our efforts on concrete interventions that will indeed exempt our children from stunting and other morbidities,’’ he notes.

All in all, stakeholders in health sector plead with the Nigerian government to intensify efforts towards poverty reduction to enhance the ability to purchase nutritious food at the household level to reduce child stunting. (NANFeatures)