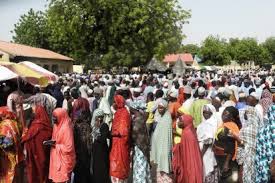 Governor Mohammed Abubakar esq who was represented by the State Chairman, Bauchi State Primary Health Care Development Agency (BASPHCDA), Pharmacist Adamu Ibrahim Gamawa told IDPs in the camp that, the gesture is to carter for their well being and improve their health condition.

He said government will commence Health education in the camp for the IDPs living in all the camps within the state.
According to him, “ health education is imperative following the outbreak of Lassa fever in neigbhouring states where all the IDPs are from”.

He explained that, the camp harbors 386 IDPs, all from Mangu and Jos East local government areas  of Plateau state where cases of Lassa fever is still prevailing.

“This followed the outbreak of a disease suspected to be  lassa fever that is claiming lives in some states including our neigbhour Plateau state.
“As such Bauchi state has taken steps to forestall any out break of th disease in the state by educating the IDPs” He said.

The leader of the IDPs in the camp, Ado Ibrahim commended that State Government for the kind gesture and hosting them in the state.
He therefore called on the Governor Mohammed Abubakar to empower them to become self reliance in order to bring an end to the hardship they are facing.

The Camp Director, Red Cross Mustapha Ahmed commended the Agency saying this the second time they are donating relief materials to alleviate the plight of the IDPs in the camp

Nigerians, can we talk less and save more kids from dying?