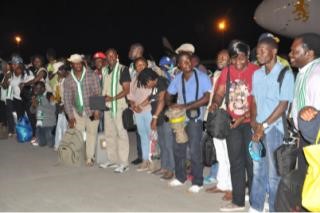 250 Nigeria Ebola Volunteers who fought against deadly Ebola Virus in some Ebola Stricken countries in the African region gallantly arrived Nigeria this morning amidst shouts and songs of victory, alive, hail and hearty.
A chartered Ethiopia Airplane carrying the returnees who help contain Ebola in Liberia and Sierra Leone landed in Abuja after being delayed for nearly nine hours in Freetown for reasons of documentation.

The flight was scheduled to arrive Abuja by 7:30pm but was not airborne until three hours later in the Sierra Leonean Freetown. It landed 2.38 am Sunday morning at Nnamdi Azikiwe International Airport bearing the 250 volunteers who were deployed to the West Africa Sub-region December 3. The 250 returnees were accompanied with a commemorative plate from Liberian government, bearing the inscription “The Love of Liberty”—a message of gratitude from the Liberian people. Shouts of jubilation filled the air as the first few volunteers descended the flight steps onto the tarmac, and they hugged liberally.

Security briefing ahead of the contingents’ arrival was already done and provision made to sweep them through arrival and screening, before they were shuttled to a hotel in Central Abuja ahead of their welcome by President Goodluck Jonathan later on Sunday.

The volunteers did not contact any infection at all, officials on the delegation said. They had spent between 26 to 42 days under inspection as their stint ended, before their journey back to Nigeria, but would still be put under scrutiny.

“By the regulation they have all gone beyond the period [required for monitoring] but we shall apply the same scrutiny to give Nigerians the assurance that nobody is bringing in Ebola again,” said Dr Nasir Sani-Gwarzo.

“These are the most educated, experienced, exposed individuals in terms of knowledge of Ebola and how to fight it.”

Olawale Mayegun, who convened the contingent before their deployment to join other AU volunteers in Ebola-stricken countries last December, said the volunteers followed protocol required for dealing with Ebola.

“We thank them for following our protocol. No contamination,” said Mayegun.
“They are an asset for Nigeria and an asset for Africa. Let us treat them as heroes and heroines. Nigeria is proud of them.”

Permanent Secretary in Ministry of Health, Linus Awute, spoke of “success that a disease that came in to threaten the subregion has been suppressed.”

“We were able to do this through the collective undertaking of the entire pop of Nigeria. While you were there everybody prayed and wished you well,” he added.
“Everybody is looking on Africa today, that Africa solidarity initiative is working,” said a volunteer.
“The first step to dealing with Ebola is to deal with fear. So we overcame fear and we triumphed.”

Liberia was declared free of Ebola last week by the World Health Organisation. No new cases have been reported in Sierra Leone lately, officials said, though the last suspected cases are still under observation for 42 days before they are declared free. For hours communication to ascertain the state of the flight was scarce, but officials confirmed documentation delayed the flight. Ministry of health officials, including members of a special committee to welcome the contingents at 5pm, and four hours later still insisted the flight was already well into Nigerian airspace. The delay forced the welcome party to spend the night at the airport.