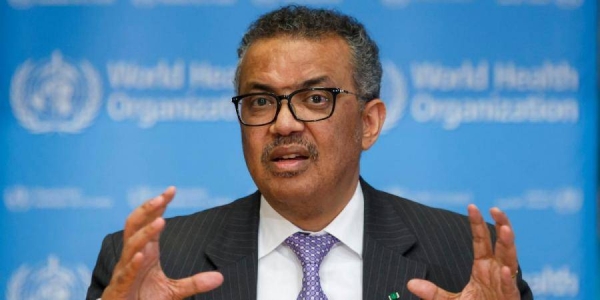 The Director-General of the World Health Organisation (WHO), Tedros Adhanom Ghebreyesus reported that the death toll from the disease is now at its lowest level in almost a year.

He, however, said although COVID-19 deaths continue to decline, vaccine inequity persists, calling for greater support for developing countries.

“But it’s still an unacceptably high level, almost 50,000 deaths a week, and the real number is certainly higher,” he said, speaking during the regular WHO briefing from Geneva.

“Deaths are declining in every region except Europe, where several countries are facing fresh waves of cases and deaths.  And of course, deaths are highest in the countries and populations with the least access to vaccines.”

Tedros appealed for global cooperation. “Countries that continue to roll out boosters now are effectively preventing other countries from vaccinating their most at-risk populations,” he said.

As of Wednesday, there were more than 238 million COVID-19 cases worldwide, and more than 4.8 million deaths.

WHO had previously pushed governments to vaccinate 10 per cent of their populations by the end of September, a target which 56 nations missed, most of them in Africa.

Tedros said even more countries are at risk of missing the 40 per cent target to be achieved by the end of the year.  Three countries – Burundi, Eritrea and the Democratic People’s Republic of Korea – have yet to start vaccinations.

“About half of the remaining countries are constrained by supply. They have a vaccination programme underway, but don’t have enough supply to accelerate enough to reach the target,” he said.

Meanwhile, WHO and partners are working with other countries, such as those affected by fragility or conflict, to strengthen technical and logistical capacity for vaccine rollout.

“With aggressive and ambitious action, most of these countries can still reach the 40 per cent target by the end of this year, or be on a clear pathway to reaching it.”

Tedros also addressed the escalating crisis in northern Ethiopia, where a nearly year-long war in the Tigray region has left up to seven million people in urgent need for food and other assistance.

The conflict has spilled over into neighbouring Afar and Amhara, further increasing needs and complicating response efforts. Aid is not reaching the area “at anywhere close to the levels needed,” he said, and communications, electricity, other basis services remain cut off.

WHO and partners are calling for unfettered access to the affected regions, as the lives of millions of people are at stake, Tedros told journalists.

“People with chronic illnesses are dying due to lack of both food and medicine. Nearly 200,000 children have gone without critical vaccinations,” he said

“When people do not have enough food, they are more susceptible to deadly diseases, as well as the threat of starvation, and that’s what we’re now seeing in Tigray.”