The Dangote and Bill & Melinda Gates Foundations, have restated their commitments to sustaining the fight against polio in Kano State.‎

The Chief Press Secretary to Governor Abdullahi Ganduje of Kano State, Malam Abba Anwar, stated this in a statement issued to newsmen in Kano. ‎ 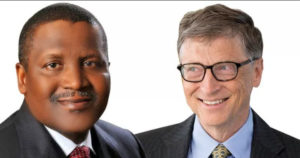 According to the statement, Dangote and Gates reiterated their promises via a video teleconference on a mid-year review meeting on ‎strengthening strategic routine immunisation held at the Government House in Kano.

‎Anwar added that they also commended Governor Ganduje, for being serious about health care delivery in the state.

They further reiterated commitment towards aiding many more success stories to come out from the state.‎

Hussaini said efforts were expanded from Routine Immunisation to broader health in agencies under the state’s ministry of health.

“By the year 2021, most public health programmes would have been covered by the Kano health system strengthening efforts.

“From January to June 2019, parts of our priority areas included scaling up of fruitful synergy between primary and secondary health facilities,” he said.‎

He said that their efforts ultimately resulted into rolling out a Phase 1 referral linkage between the two stages of the health facilities.

Among such priorities he mentioned included, assessing facilities operating the Drug Revolving Fund (DRF) scheme to validate compliance with the state’s guidelines.

According to him, assessment has been conducted in 132 health facilities with highest DRF transactions.

He said another milestone was the development and commencement of implementation of `Smart Integrated Community Engagement Plan for Health in all the 44 local government areas of the state,” he said.

He explained that the efforts led to community personnel being co-opted to support other important health programmes beyond the immunisation space.

“We now have a draft plan that has already been developed to further improve quality care. The draft only awaits finalisation now.‎

‎He said Kano State had not recorded any case of wild polio virus since 2014, saying that only three environmental cases were identified in Tarauni LGA since the outbreak in July 2018.‎

‎According to Anwar, Ganduje commended Dangote, Gates and all other stakeholders for finding it worthy to support the state’s health sector.

He also said that his administration’s partnership with all stakeholders was being strengthened.