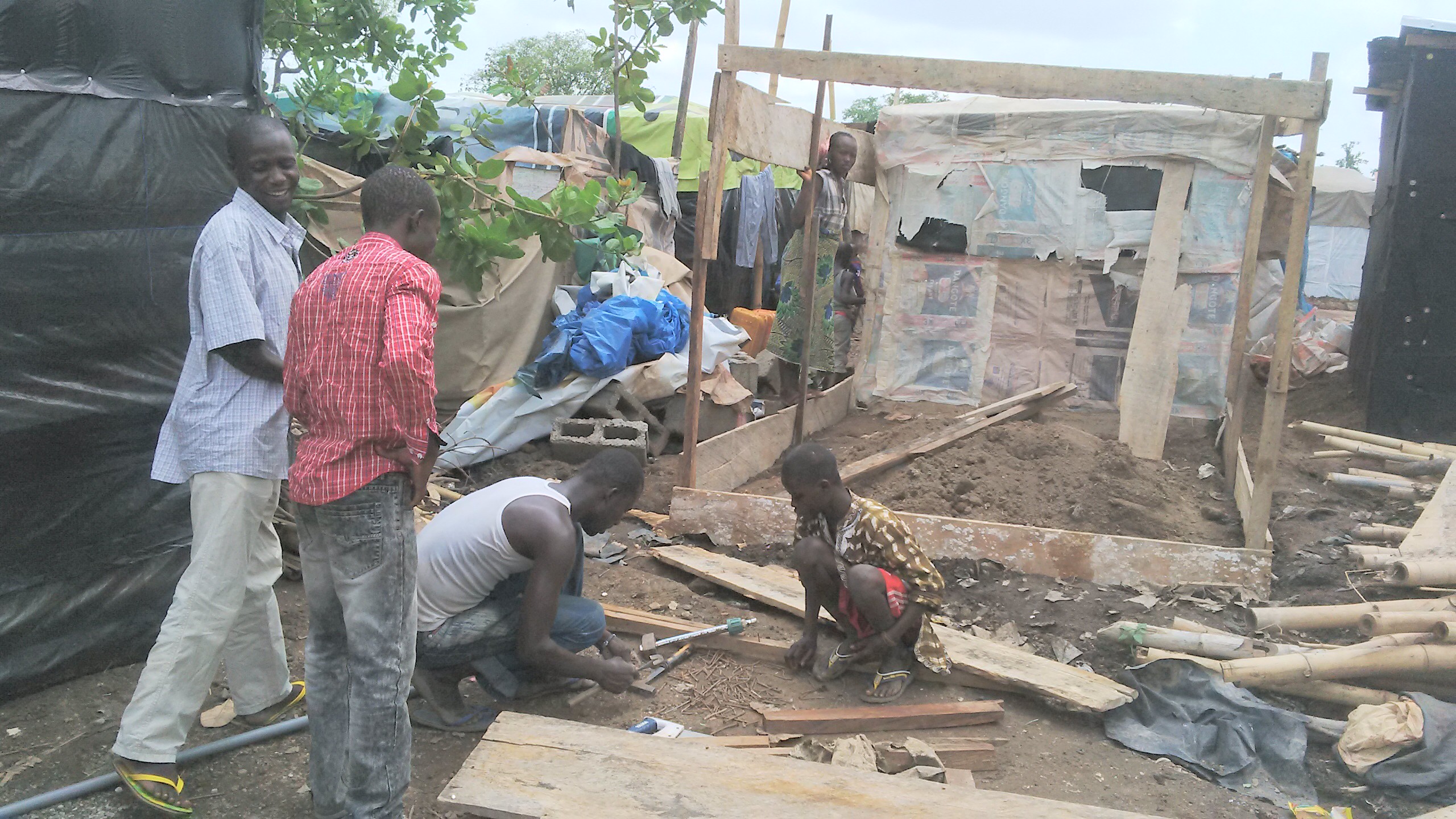 Like other Internally Displaced Persons who found their way to Nigeria’s Federal Capital Territory for safety and succor away from insurgency meted in the North East, Nigeria, Mohammad Lawal, 29 years old have more challenging task ahead of him. He has a one year old child, and a wife with five months old pregnancy to cater for. He is jobless and depends on gift items from sympathisers and from some government agencies to feed himself, his one year old child and a pregnant wife.

“Sympathisers don’t come often, when they do, we get the little they could offer and mange it till other people bring their own gift items.

Lawal’s worry has moved from the unavailability of food items for his family to his ‘mistake’ getting his wife pregnant again, he said, “her pregnancy is a problem.”  Narrating their ordeal, the first child, was born in Chinene in Gwoza local government of Borno State, two months after birth, his house was raised down by inferno after an attack on the community, the family ran to Cameroon for safety, from Cameroon returned to Adamawa but the state was not safe for Lawal’s Family, so they made their way Abuja.

The last four months in Abuja has been calm, no gun shots or bombings happening around but the IDPs have more challenging issues, Lawal’s fresh problem is how to raise two children in a 10 by 10 room made with sack bags of used cements, his wife is pregnant the second time “I discovered my wife was pregnant again when we got to Abuja” an unplanned blessing coming in a traumatizing environment. On arrival to Abuja, the family settled in an uncompleted building, but had to be pushed out by the owner of the site, but the sack bag house has not been able to cover his pregnant wife and one year old baby when the stormy rain drops. “Last night was bad for me and my child and wife, when the rain started, my one year old child had cold, I was afraid I thought he would  die, then I took them that midnight, we ran out of this house to the uncompleted building again, that was where we stayed till this morning, this is the reason why I think this my wife pregnancy is a mistake” he said

Preventing pregnancy for Lawal is a new knowledge he will have to hold on to for the rest of his life, he said  “I have never tried to prevent, but before I understand it is already late, this is the kind of predicament I have found myself” While the wife remains pregnant, Lawal would still need his wife’s comfort and intimacy, but agreed on taking precaution to prevent more pregnancies from coming after her delivery” an awareness programme from Plan Parenthood Federation of Nigeria on Family Planning has empowered him on how to prevent pregnancies.

The Federal Capital Territory officially has over 18, 635 IDPs since it had its last count in February, and “more are coming into Abuja” Director General of the Federal Capital Territory Emergency Maintenance Agency, (FEMA) Alhaji Idris Abbas, told Health Reporters. Abbas did confirm that more women get pregnant in the camp, he said why soldiers make more babies than civilians is due to the reaction of Trauma that comes after they return from battle fields, “the memories are hard to do away with”, to survive, they often rely on the comfort of their spouse, to forget the fears, horror and bad experiences they may have had during war, if this can happen to a soldier how much more of a civilians.

Abbas also confirmed in one of his responses to the state of Internally Displaced Persons in Abuja, that what is inevitable is baby making (unplanned pregnancies) for the IDPs due to unavailability of family planning methods to prevent unwanted pregnancies. Getting to educate the IDPs on family planning and preventive methods against unplanned pregnancies, has been challenging for Abuja’s National Emergency Maintenance Agency, (NEMA), its Deputy Director Risk and Disaster Reduction, Bitrus Simon, alleged the IDPs abruptly refused to accept  family planning commodities brought by some health care agencies visiting the locations.

Attributing it to some cultural beliefs of the IDPs against family planning, but Plan Parenthood Federation of Nigeria (PPFN) has a different view and experience with the IDPs. Helping Hadija Usman through a miscarriage from her 13th pregnancy paved way for the displaced women to embrace PPFN strategic approach to parenthood information “Saving Hadija, a mother of nine who has lost four babies at 35 years old, made PPFN a choice to trust for the IDPs” Dr Jennifer Briama working for PPFN said, through PPFN Hadija has long lasting family planning method to prevent more babies from coming.

“For the women, what is peculiar with them is that they are so willing to accept our services, a lot of people have approached them with some medical care and they refused them, they ran away due to their own reasons that they were not properly treated and some disappointments they encountered. When we approached them with our own strategy, they were willing to have us take care of their health care needs, and tap into the services we came here with” Briama said.

Plan Parenthood Federation of Nigeria tries to educate people on the dangers of having too many children that will be difficult to cater for, but Briama said the IDPs making more babies is attributive to “comfort factor”- when violent erupts, husband and wife want to comfort each other natural things happen pregnancies come up”

Through PPFN women willingly opt for family planning with the support of the husbands, but its resources is limited to carry the demands, visiting the women twice a week has made Briama a part of the women, now they could speak up about their sexual life style.
“The women have told us that if they have a place where they can access family planning they will gladly do it and that is where we come in as PPFN and I’m happy to say that we have been able to offer these services to the women who are willing to take care of the babies that they already have, we are talking about women who already have 15-18 pregnancies some dead some alive and the ones that are alive cannot eat well and are not properly taken care of because of the situation that they face” Briama added

With about 30 women being helped through pregnancies and safe deliveries, and over 100 having accessed the family planning programme, since PPFN began its work in five  IDP locations in Abuja in January 2015, hopes for continuation are dimming, “this is not what PPFN alone can do, the health challenges needing intervention here are enormous, I do wish that other well-meaning health NGOs could come in to help, the gains of saving these lives could never be quantified with the loss of any life here, these people have suffered, they are vulnerable and this is the time to make them feel like real Nigerians again, give them the support and health services they need” Briama pleaded.

It has also helped some of the women through successful births, “we have beautiful births among them since January there has been some safe deliveries of eight children, about four boys and four girls” Briama however said “An IDP site is not a best place to have kids, they are suffering living from hand to mouth, what can the mothers eat that could make their babies healthy, so the best way is to plan for the pregnancies, how can a man and woman living in a 10 by 10 room made by discarded rice bags, think of raising five to seven children, it will be hell for them”

Adopting PPFN plan could be useful to willing organizations reaching the IDPs  “PPFN has provided them with long lasting contraceptives  that could last from three to five years and they are willingly accepted” No time for cultural barriers, the Abuja IDPs has its leadership an organized way of ensuring that their decisions are uniform, leaders of the camp-the husbands are first point of contact, “without hesitation they accept our offer to help their wives prevent pregnancies that are not needed at their difficult predicaments” Briama maintained.

Minister of Health; does the cap not fit Dr. Ali Pate?