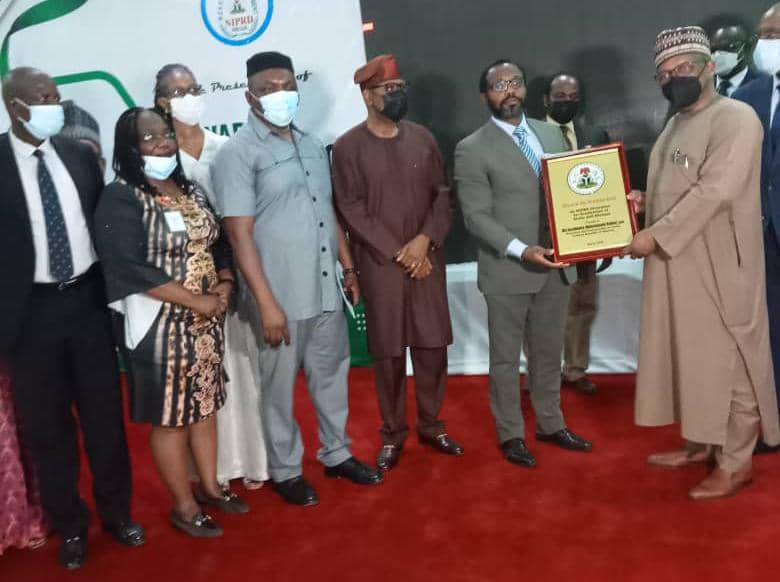 Nigeria’s President Muhammadu Buhari said the Federal Government will continue to provide the needed support to the National Institute for Pharmaceutical Research and Development (NIPRD), to enable it improve its capacity in local drug production.

The president stated this while receiving an award as the NIPRD Champion for the eradication of Sickle Cell Disease (SCD), in Abuja.

“We will continue to do our best to ensure that priority is placed on the local production of medicines by providing the appropriate support for NIPRD in order to carry out her mandate.

“It is our best desire to see that these contributions to research and development in the country subsequently eradicates sickle cell disease and promotes healthcare for the Nigerian people,” he said.

Represented by the Minister of Health, Osagie Ehanire, the said that, “my joy remains that indeed, this administration has played critical roles to promote the eradication of sickle cell disorders by ensuring the ease of manufacture and commercialisation of NIPRISAN, now called NICLOVIX.

“The production of NICLOVIX by manufacturers in the country has substantially increased access to the drug for people with SCD within and outside the expanse of Nigeria.

“I am particularly optimistic of our ability to achieve more as a nation to subjugate the menace of sickle cell disease that has been prevalent in the Sub-Saharan African region.”

Speaking, the Minister of State for Health, Senator Adeleke Mamora, applauded NIPRD  for emerging as a regional leader in developing evidence-based interventions for healthcare.

Some of the most outstanding breakthroughs at NIPRD, according to the minister, are in the areas of sickle cell anaemia, malaria, diabetes, fungal infection and peptic ulcer.

“It is now a well-known fact that NIPRISAN, a phytomedicine developed by the Institute is world renowned for the management of sickle cell disease. NIPRISAN is patented in the US (US patent No. 5,800,819 of September 1998) and there is evidence that it is being used in 45 other countries across the world.

“I believe the Institute deserve to be applauded for finding a remedy to sickle cell disease for which Nigeria bears the highest burden globally.

“In terms of sickle cell disease management, though we may not have gotten to the peak, however, following the development of NIPRISAN, we are no longer where we used to be.

The Minister further disclosed that during the first term of this current administration the Federal Executive Council approved the Licensing Agreement for NIPRISAN with a local manufacturer, and this commercialisation process ultimately resulted to an exponential increase in accessing the product globally.

This initiative, he noted, has consequently increase access to healthcare services for sickle cell disease patients both within Nigeria and beyond, as well as improving their quality of life.

Earlier, the Director General of NIPRD, Dr Obi Adigwe, commended President Buhari for his support towards NIPRD’s innovative potential for traditional medicines and first-in-class therapies that will subsequently subjugate the menace of sickle cell disease and improve access to quality healthcare delivery in the African continent and the world at large.

He recalled that the approval by the National Executive Council for the Licensing Agreement for NIPRISAN™ with a local manufacturer, was a turning point for the sickle cell medicine.

“This landmark initiative has ultimately resulted in an exponential increase in access for people with SCD, not just in Nigeria, but across Africa and globally as well.

“With the support of His Excellency, NIPRD convened and developed a phytomedicine verification and validation protocol to ascertain the safety and efficacy of indigenous resources and has since being championing innovative strategies for the production of medications that possess reasonable activities such as NIPRIMUNE and NIPRIMUNE PLUS against COVID-19.”