FG promises promotion of Community Based Rehabilitation for persons with disabilities 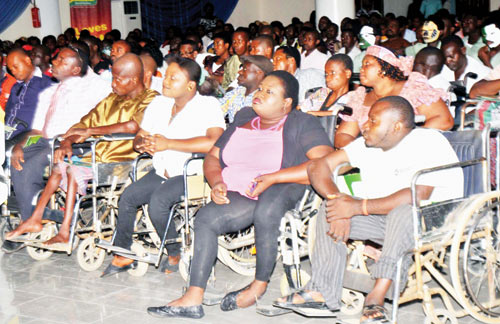 The Federal Government on Thursday 8th Jan 2015 renewed its commitment to ensuring that Persons with Disabilities (PWD) receive Community Based Rehabilitation (CBR). The Minister of Women Affairs and Social Development, Hajia Zainab Maina, made this known in an interview with the News Agency of Nigeria (NAN) while addressing the need to reach out to PWD at the grass roots. Maina said that government through her ministry had been consistent with programmes to empower PWDs.

She added that the ministry had involved community, family, government agencies and Non-governmental Organisations (NGOs) in training, rehabilitation and integration of PWDs to enable them mainstream into the society. Maina said: “We have continued and will continue to promote and articulate the CBR.
“We have continued to empower and facilitate the mobility of PWDs through the provision of various aids and appliances.’’

The minister said that the ministry had been doing its best to enroll PWDs, especially the visually impaired persons, in specialised schools to enable them receive quality education.

She added that the minister had resettled PWDs and gave working tools to individuals with disabilities in rehabilitation institutions in all parts of the country.

The minister expressed optimism that improvement in the welfare of PWDs would be fortified optimally to enable them to contribute effectively toward sustainable nation building.

“Lot of them are resourceful and are venturing into various economic empowerment programmes.
“We believe they can do lots more if supported and encouraged.”

The minister said that children were also included in government programmes for PWDs, saying that when children with disabilities were recognised early in life, they would not be misguided in their actions.