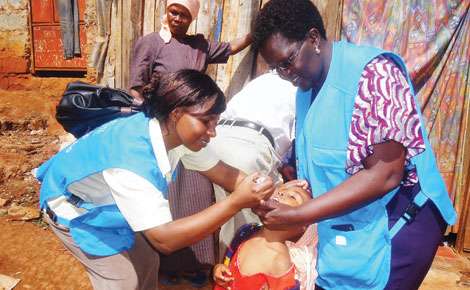 Global End Polio Now Torch has arrived Nigeria eight months since the last recorded infection of polio virus in the nation to help raise funds against the Polio. The torch is Rotary International’s attempts to fund global anti-polio efforts as it passes through cities—and the three polio-endemic countries of Nigeria, Afghanistan and Pakistan—before reaching the organization’s convention in Sao Paolo this June.

The “flame” -like the Olympic torch–was lit last December in Chennai, India to commemorate India’s becoming polio-free and “to promote the need to go the last mile in the battle to eradicate this horrible crippling disease,” said Mogboyi Omatsola, governor of Rotary’s Abuja district.

“The presence of the Torch has brought new energy to our efforts so we are obliged to refocus our efforts on polio awareness,” said Omatsola.

India’s high commissioner to Nigeria, Ajjampur Rangaiah, who accepted the torch in Abuja on Thursday, said Nigeria was taking the steps India took shortly before it was declared polio free.

“We fought against polio for 20 years at enormous cost and we are now planning to continue to sustain it,” said Rangaiah. “We want the rest of the world also to be with us.”

Rotary coordinates fund raising from governments, organisations and individuals to complement Nigeria’s spending on polio—and estimates it has spent $1.2 billion since 1985 when the initiative started.

Anti-polio efforts worked with support of its government and ordinary individuals to let “everybody know that so long as there is a child with polio, every child is at risk,” said Dr Mike Omotosho, newly elected governor of Rotary’s District 9125 in Abuja.

“Of course there are still gaps but we are communicating this lesson to everybody that cares to listen that until every child is immunised, we are not free and we will get there.”

Nigeria is looking to complete a year without new polio infections by July 24, but will need to go two more years without any infections to attain a polio-free status from the World Health Organisation.