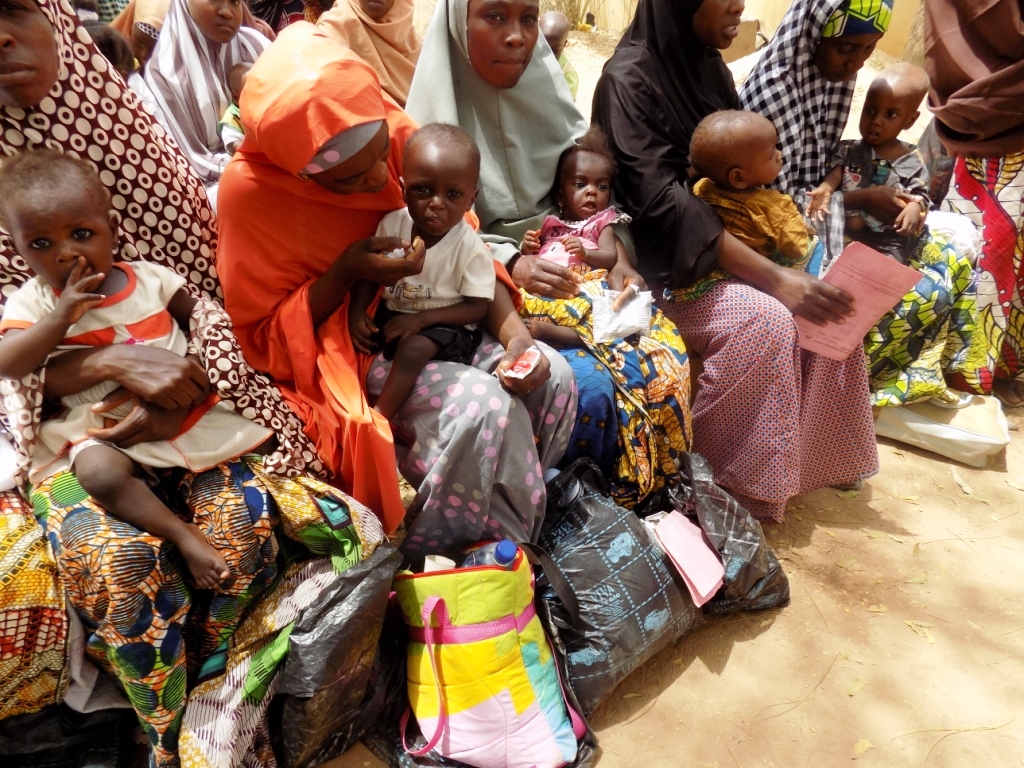 The twins are her eight successful delivery, but she seems to be overwhelmed with the health status of the twins.  She visited the CMAM site with uncertainties, but health workers services at the site were reassuring, now she has Ready-to-Use Therapeutic Food (RUTF) and other treatment given to her babies.

“A man came to my house and told me that my children will die if I don’t come here, that they are sick and looking very hungry” Barira told our correspondent through a translator, Mallam Shehu.

Naivety is her reason, when asked why the children were so thin, she said “I did not know, I was giving them water, I did not breast feed exclusively, because it is how I raised my other children.”

Her expression further exposed her level of knowledge about malnutrition, but it was certain to Barira that if she had not visited the CMAM site, her children would have been counted among those lost to SAM every year in Nigeria.

“These treatment therapy are available but there is still low turnout of patients from communities. It is more in rural areas where some of them have to walk very long distances to get to these sites, these affect their turnout,” UNICEF Consultant for Nutrition in Kano, Mr. Murtala Ayodele said.

He further explained that there are cases where the children die, “this happens when the children are brought by their parents very late to the site, while others have very complicated challenge and the way they respond to treatment based on other health issues they have been exposed to due to their low immune system.”

Management of SAM in the state has increased overtime, and children with severe cases get well within one week of commencing treatment, but some mothers according to Mr. Ayodele still do not heed to health recommendations, “Often when referrals are made by health workers, the parents don’t take it serious, they take the children home, then the child is brought late when it will be difficult to stabilize the child.”

Ayodele said people come from other local governments for the RUTF, like Barira who travelled for two hours to CMAM site at Sumaila from her community, she narrated that she to walk some miles to the road where she finally got a vehicle coming to Sumaila.

“We are getting support from the UNICEF, we have been getting the RUTF from them, supplies have been consistent and as much as we want, it is just for us to write the board, the nutrition focal person will sign, the department of food and nutrition in the state ministry of health will sign and we go to the store for supplies, it is easy” Lami Garba, a nutrition officer in Kano state told journalists who visited the site with Partnership for Advancing in Child and Family Health (PACFaH), a coalition of Civil Society Organizations (CSOs).

Nigeria’s Nutrition Indices in 2015 revealed that 20 per cent of child mortality can be averted, if mothers adhere strictly to breast-feeding of their babies in the first six months after birth.

In a separate advocacy for state ownership and support for CMAM programs, Head of Nutrition, Federal Ministry of Health, Dr. Chris Ose Isokpunwu had during a one-day Advocacy/Sanitization meeting for Policy Makers and Nutrition Stakeholders to Scale up Nutrition in Niger State, said that aside from 32 per cent stunted children, 7.2 per cent were wasted, while 18.6 per cent were under-weight, when not treated often worsens to SAM.

Civil Society Scaling up of Nutrition in Nigeria (CSSUNN), program officer, Sunday Okoronkwo,  said child malnutrition features stunting, wasting, macro-nutrient deficiencies and overweight and the North Western states of Nigerian has the worst prevalence of wasting and stunting  at 27% and 57% respectively.

He added that inadequate funding, inconsistency in the budgetary allocation and release as well as delayed domestication and implementation of the National Strategic Plan of Action on Nutrition (NSPAN) are endemic challenges to efforts at eradicating malnutrition in Nigeria.

Barira’s twin babies have been saved from underserved deaths which have claimed the lives of many other children often not exclusively breastfed by their mothers, nor given the right diet within the first 1,000 days of their formation, it is worth stating however that one life saved has not impacted much in reducing the status of child deaths caused by severe acute malnutrition in Nigeria.