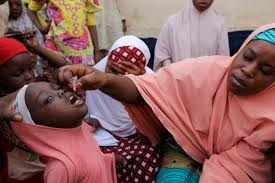 Kano State Government has established Routine Immunisation Coordination Centres in the 44 local government areas of the state to ensure effective coverage of routine immunisation in the state.

The Permanent Secretary in the Ministry of Health, Alhaji Usman Bala-Mohammed disclosed this while briefing newsmen as part of activities to commemorates the 2019 World Polio Day in Kano.

Bala-Mohammed said the state government was fully committed to ensuring that all eligible children were immunised through various programmes targeted at them.

“Because of the investments made by State Governor, Abdullahi Ganduje and other stakeholders, Kano state is now over 63 months polio free.

“The strategy to eradicate polio is, therefore, based on preventing infection by immunising every child until transmission stops and the world is polio free,” he said.

The permanent secreatary commended the various stakeholders including development partners for their contribution to the success of the polio immunisation and other related programmes.

The UNICEF Communication for Development Specialist, Dr Ogu Enemaku announced the donation while making his remarks at the occasion.