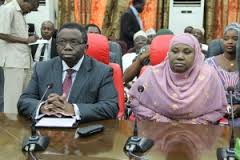 The recent outbreak of Lassa fever obviously exposed further the poor health care system in Nigeria.  It specifically told the world that Nigeria’s disease surveillance and control is still backwards and exposed the inefficiency of the nation’s Primary Health Care system.

Above all the Lassa fever outbreak which seems to have gotten out of hand is also sending the signal that Nigeria managed to contain Ebola not because all human and financial resources were made available.

The  emergency  meeting  by the Federal Ministry of Health called for with the National Council on Health (NCH) , the  highest  advisory  body  on  health  in Nigeria was  convened  by  the  Honourable  Minister of Health, Professor Issac Adewole  to  lay  the  foundation  for  a  Multi-Sectoral  Response  to  the  Lassa  Fever  outbreak  as  a matter of urgency was held  at  the  Rotunda  Hall,  Ministry  of  Foreign  Affairs  Building,  Abuja,  FCT  on  the 19th of January,  2016.  The  NCH  comprises of the  State  Commissioners  for  Health  of  the  36  States,  the  Secretary  of Health  &  Human  Services  Secretariat  FCT,  with  the  Honourable  Minister  of  Health  as  Chairman  of  the  Council.

The  specific  objectives  of  the  emergency  meeting  was  presented  to the Council  by  the Honourable  Minister  of  State  for  Health  include  the  need  to  facilitate  discussion  on the  control  of  the  on-going  Lassa  fever  outbreak,  development  of  strategies  for  the prevention  and  management  of  outbreaks, operationalisation  of  integrated  management of  outbreaks  and  emergencies  at  the  Federal,  State  and  LGA  levels;  as well as inauguration of the Lassa fever eradication committee.

During the meeting, the health minister made a presentation titled. “Laying  the  Foundation  for  a  Multi-Sectoral  Response  to  Lassa  Fever”.  The  presentation elucidated  the  Multi-Sectoral  Response  Strategy  for  the  control  of  Lassa  Fever  and  other similar  diseases.  He  called  on  all  the  States  to  strengthen  their  surveillance  systems,  report all cases  and  collaborate  with  the  Federal  Ministry  of  Health  in order to successful implementation of the strategy.

Another presentation was mad by the National Coordinator/CEO, NCDC Prof.  Abdulsalami  Nasidi, on Epidemiological Situation  of  the  current Lassa  Fever Outbreak  in  Nigeria  including  available  Response  Infrastructure/Resource  requirements  gave updates  from  Lassa  fever affected  states  who  detailed  the  progression  of  the  outbreak(s)  in  their  states  and  current efforts  to  contain  and  prevent  further  spread  of  the  disease  and  reassure  affected Communities;  as  well  as  updates  from  CMDs/MDs  of  Federal  Tertiary  Health  Institutions located  within  the  affected  States  on  their  response  and  high  index  of  suspicion  towards  all cases  coming  to  their  institutions,  their  management  of  confirmed  cases,  and  measures being  implemented  to  prevent  nocosomial  spread  within  their  facilities  as  well  as  their community outreach efforts

The emergency session with the NCH on Lassa  fever  outbreak is similar to the meeting the country held when the first index case of Ebola was reported, it could be recalled that, the night long meeting in September 2014 had all state Governors making promises to boost its disease surveillance and control system then however, many of those pledges were not fulfilled and thus, the seemingly uncontrollable Lassa fever deaths while the then administration made financial commitments for construction of quarantine centres and ambulance systems available in states. There were alleged reports that some of those funds were not accounted for.

The  efforts of the Federal  Ministry  of  Health,  its  Agencies  and  Parastatals under  the  leadership  of  the  Honourable Minister  of  Health as  well  as  the  efforts  of  all  States including  non-affected  States  who  are  actively  strengthening  their  surveillance  systems, awareness  and health programme campaigns were recognized .  But what is lacking is indebt feedback from the states on disease control and emergency response after the Ebola experience in Nigeria.

The NCH participants who said Ebola,  was different from Lassa  Fever which they said is treatable  if detected  early  and  there  are adequate  treatment  centres  spread  across  the  country added that, they were optimistic that the virus would be contained reassured  the Public  on  the  adequacy  of  the  response  to  the  outbreak  and  urged  the  Public,  Community and  Religious  leaders  to  cooperate  with  the  Health  Agencies  in  their  States  to  ensure prompt reporting of any suspected case.

A  total  of  418  delegates  participated including. Ministry,  Departments  and  Agencies  of  the Federal  and state Ministries  of  Health, Health  Institutions, representatives  of  key  Federal  Ministries  such  as  Agriculture,  Education,  Environment and  Information, Development  Partner, Higher Commissioner  of  Canada,  Innovative  Vaccines,  as  well  as  delegates  from Health Regulatory  Bodies,  Professional associations,  the  Tri-Services  of  the  Nigerian  Military and Para-Military Medical Corps.