Minister felicitates with women over contributions to national development 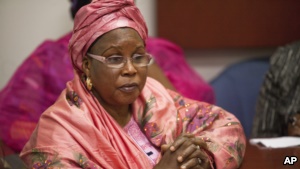 The Minister for Women Affairs and Social Development, Hajiya Zainab Maina, on Friday lauded the efforts of women over their contribution to social cohesion and national development. Addressing newsmen in Abuja as part of activities marking this year’s International Women’s Day (IWD), Maina said it was a time for women around the globe to come together to celebrate each other.

It was reported that the IWD celebrated globally on March 8, will highlight the Beijing Declaration and Platform for Action as an agenda for realizing women’s right. The theme of this year’s event “Empowering Women, Empowering Humanity: Picture it and Make it happen”, is to take analysis of the accomplishments of the Declaration since inception in 1995. The minister noted that remarkable change had been achieved in ensuring that the Declaration was fulfilled in the Nigerian context.

“Nigeria has made progress in achieving results in increased basic education, reducing the proportion of underweight children, eradicating extreme hunger and reducing maternal mortality rates.
“Developing an action plan for implementation of UN Resolution 1325 on Women, Peace, Security and establishing the National Guidelines and Referral Standards for addressing Gender Based Violence in the country,” she said.

Maina also stated that despite the milestones recorded, several interventions were still needed to achieve the targets of gender equality, women empowerment, reducing infant mortality and environmental sustainability.
“The country has been unable to meet up with all the MDG targets 15 years after making appreciable strides in implementing the areas of concern.
“There have been poor funding of gender and women empowerment initiatives, non-legislation of 35 per cent gender affirmative action, poor lack of sectoral synergy to implement the National Gender Policy, among others,” Maina said.
Towards achieving peaceful elections, she said that the ministry had embarked on the sensitization of female voters and training of women candidates in the North West and North East Geo-political zones.

She said this they did by also establishing programmes to sensitive illiterate women and first time female voters round the country. The minister added that the role of women towards nation building cannot be neglected, adding that women were better managers.

“The role of women in nation building has received recognition with intensified efforts by World Organizations and Political leaders advocating for more women participation in leadership.

“This is in direct response to experiential evidence that demonstrates that women can influence peace, reconciliation and other components of nation building,” said Maina.
However, she condemned the incessant violence meted on women both in the society and the world at large, adding that gender inequality impact negatively on individual productivity.

“Increasing incidents of rape of infants, minors and older women, the rape of women and girls in Internally Displaced Person’s camps is creating a real cause for concern,” she said. She said that the ministry in collaboration with other partners has developed the National Guidelines to provide criteria and create standards for intervention in such cases. The minister urged women to exercise their right through casting their votes rightly and ensure that their children were not involved in any form of election violence.
She also advised women not to merchandise their Permanent Voters Card, adding that it was their right. The minister pledged support to UN women Executive Director’s call on all countries to step up their actions for gender equality.