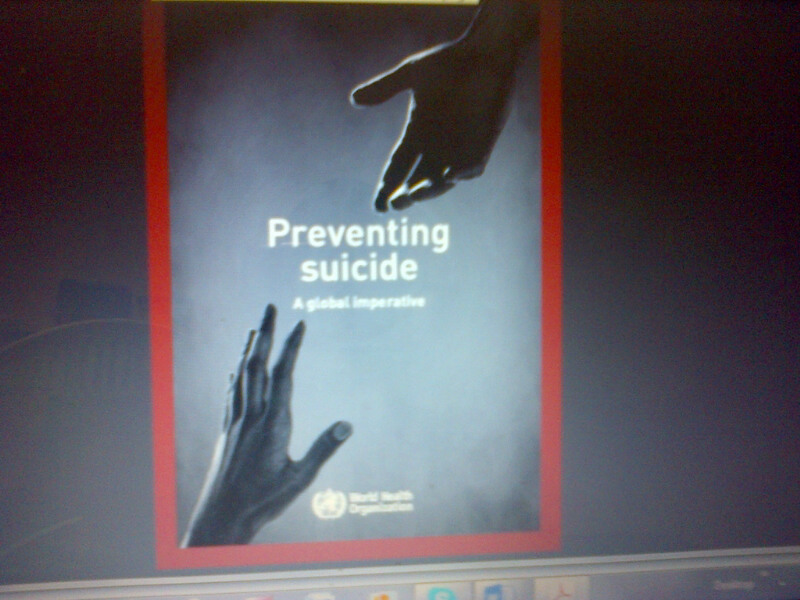 According to a News release by World Health Organisation made available on 4th SEPTEMBER 2014 – “More than 800 000 people die by suicide every year – around one person every 40 seconds, according to WHO’s first global report on suicide prevention.  Some 75% of suicides occur in low- and middle-income countries.

The release observed that pesticide poisoning, hanging and firearms are among the most common methods of suicide globally. Evidence from Australia, Canada, Japan, New Zealand, the United States and a number of European countries reveals that limiting access to these means can help prevent people dying by suicide. Another key to reducing deaths by suicide is a commitment by national governments to the establishment and implementation of a coordinated plan of action. Currently, only 28 countries are known to have national suicide prevention strategies.

“This report is a call for action to address a large public health problem which has been shrouded in taboo for far too long”. Says Dr Margaret Chan, WHO Director-General.

Suicide occurs all over the world and can take place at almost any age. Globally, suicide rates are highest in people aged 70 years and over. In some countries, however, the highest rates are found among the young. Notably, suicide is the second leading cause of death in 15-29 year-olds globally.

“This report is a call for action to address a large public health problem which has been shrouded in taboo for far too long” said Dr Margaret Chan, Director-General of WHO.

Reducing access to means of suicide is one way to reduce deaths. Other effective measures include responsible reporting of suicide in the media, such as avoiding language that sensationalizes suicide and avoiding explicit description of methods used, and early identification and management of mental and substance use disorders in communities and by health workers in particular.

“…effective measures can be taken, even just starting at local level and on a small-scale”. Says Dr Alexandra Fleischmann, Scientist in the Department of Mental Health and Substance Abuse at WHO

“No matter where a country currently stands in suicide prevention”, said Dr Alexandra Fleischmann, Scientist in the Department of Mental Health and Substance Abuse at WHO, “effective measures can be taken, even just starting at local level and on a small-scale”.

WHO recommends countries involve a range of government departments in developing a comprehensive coordinated response. High-level commitment is needed not just within the health sector, but also within education, employment, social welfare and judicial departments.

“This report, the first WHO publication of its kind, presents a comprehensive overview of suicide, suicide attempts and successful suicide prevention efforts worldwide. We know what works. Now is the time to act,” said Dr Shekhar Saxena, Director of the Department of Mental Health and Substance Abuse at WHO.

The report’s launch comes just a week before World Suicide Prevention Day, observed on 10 September every year. The Day provides an opportunity for joint action to raise awareness about suicide and suicide prevention around the world.