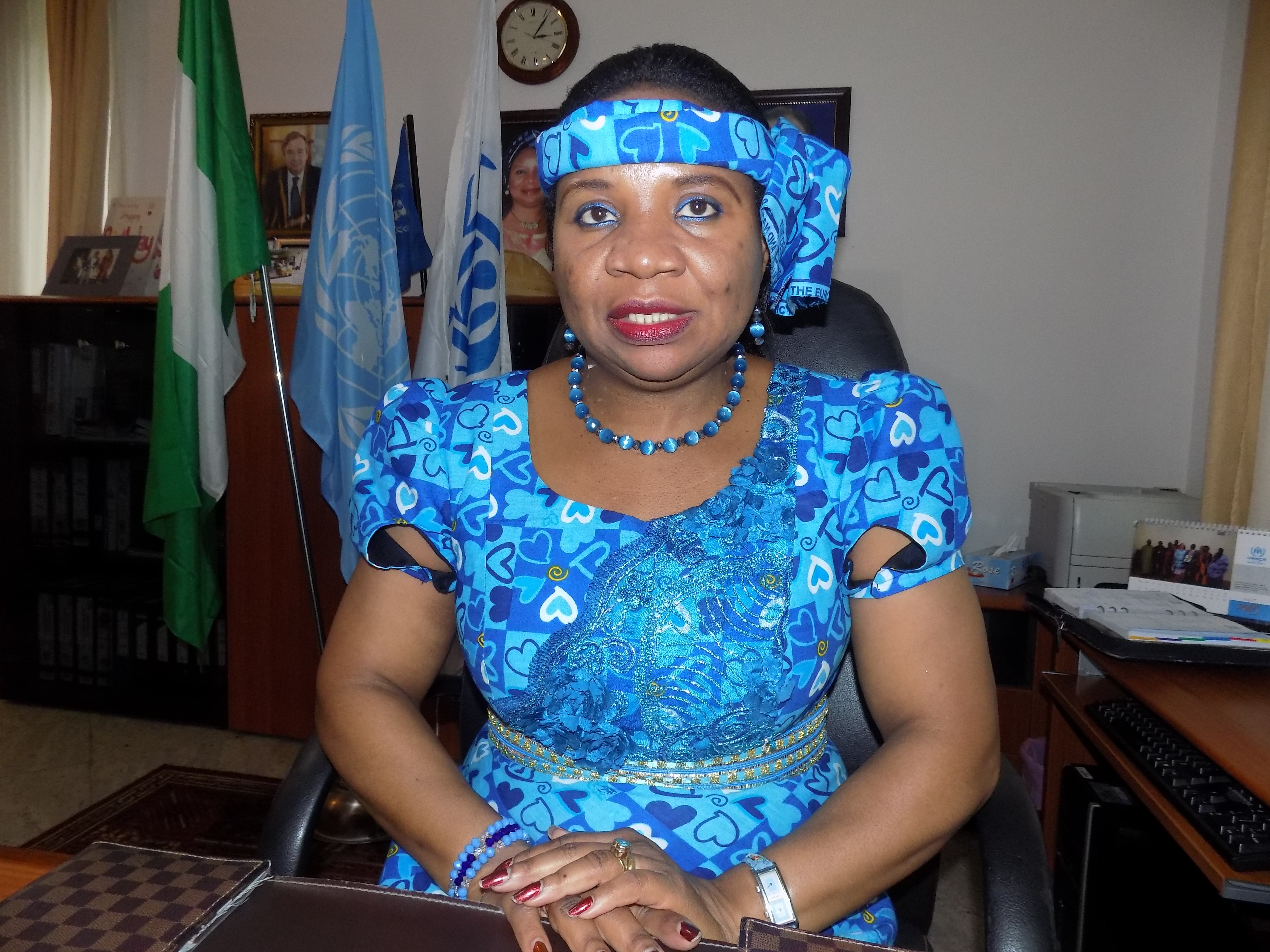 The United Nations High Commission for Refugees (UNHCR) in Nigeria has been working towards protecting Internally Displaced Persons in Nigeria. In an exclusive interview with Health Reporters’ Ndidi Nwachukwu, the Country Representative of the UNHCR in Nigeria Ms. Angele Atangana, Nigeria spoke at length on the situation of Internally Displaced persons (IDPs) in the country.

Question: Madam is it true that there are over a million IDPS in Nigeria?

Answer: Nobody was able to give a single figure or data about the displaced persons in the country before now. It was a situation where it was not being acknowledged that displacement was a reality in the country but today all the stakeholders now agree that we do have displacement situation at hand and different stakeholders have come out in some way to identify and try to gather some statistical information on the displaced persons. We do agree today that there are about 1.4 million displaced persons in Nigeria especially in the North East where virtually more than 99 percent of these people are found.

Question: In your opinion Ma is this insurgency specific to Nigeria?

Answer: No, it is no longer a Nigerian issue; it has become an international security matter in such a way that we know the connection of this insurgency with other terrifying groups, so it is important that this is brought to an end.

Question: Madam can you tell us what imminent danger IDPs are exposed to?

Answer: They are exposed to so many dangers, if you have been in the scene where these dangerous atrocities are taking place like in the Northern Part of Adamawa or Borno outside Madugiri or Yobe outside Damaturu, bombing incidents are a daily occurrence, attacks by the insurgents have somewhat resumed when we at a moment thought it was abating. These people face all sorts of risks ranging from losing their lives, the risk from being maimed and their physical integrity is at stake. The women risk being assaulted, we know so many girls and women have been abducted and some of them enslaved and used as sex slaves and some of them have come back with pregnancies and sexually transmitted diseases, the risks are really enormous.

Question: How would you define their living conditions based on what you have seen so far?

Answer: Their condition varies depending on where they are since some of these displaced persons are staying in communities that are not accessible to humanitarian actors who will want to access them and give assistance. Whether they are in official camps or some self-start locations those who are in camps are receiving good attention in the sense that national and state interventions are reaching them. Some of them are receiving some cash based assistance and food items, they are receiving protection in the form of monitoring in the sense that they all know where to go if they have challenges and what to complain about them. They are receiving a good package of assistance however, where the situation is really difficult is for those who are in communities and for that we are expecting that with the establishment of the protection monitoring system which we are working on with the National Human Rights Commission, we are planning of placing 30 protection monitors in each of the nine states.

Question: Still on their living conditions Ma, what would you suggest for IDPs staying in communities that are not accessible to humanitarian actors?

Answer: In the meantime what really need to be done is to ensure that we have access to the humanitarians who can help these people, women and children who are in need of basic help.

Question: What plans do you have for IDPs with the establishment of the protection monitoring system in the affected states?

Answer: The Six North Eastern States and three North Central States Benue, Nasarawa and Plateau, and FCT which will make it 10 in total. We are hoping that this will help us mark the feet and ensure we can help in preventing some of the protection issues and also assure that we can help in responding to those which have already occurred. We have 314 protection monitors in the field; on our part we ensure that these protection monitors are really doing what are their terms of reference stated. This is taking place and we hope that between now and next few months we will have a situation putting us under control as far as the protection issues are so it is not just a matter of mere protection as to their psychosocial needs but it is really all inclusive.

Question: In Abuja what are existing are not official camps, they are self made locations, which are also prone to attacks due to poor security, is the government and leadership of affected states really responding to this rising displacement crisis?

Question: Ma it is a known fact that IDPs are survivors, who have come face to face with death but managed to survive, having lost everything, some part of the society still grow thick skin against them, do you think IDPs in Nigeria are coping well , how can you describe their pain?

Answer: It is not really easy to describe what these people are going through, these are human beings; humanity today is a global village. It is like a boat, we are all in it, if it has to sink we all sink with it, if it will remain afloat we will all remain afloat, I can’t believe that Nigerians will grow thick skin against these IDPs, because as long as this insurgency continues no part in Nigeria is safe yet. Since humanity has come up with crime against humanity every human being Nigerians inclusive should feel concerned about what is happening. We should declare solidarity for humanity. Humanity is really in danger by what is happening over there. International Solidarity has to be the order, before now it was only Nigeria that insurgency were operating now it has gone beyond the territory of Nigeria and will go further if left unattended to. I am calling for solidarity for humanity in ending insurgency.

Question: What other efforts are being made to make them feel a sense of belonging as citizens of the country?

Answer: They are receiving psychosocial assistance from different agencies and groups, they are receiving child protection interventions, and women protection, they have received some dignity kits, some of them given by UNFPA and UNICEF, on our part we have our kits that we have been distributing, this is what we call none food items which we give to them. One specific item that has been really appreciated by all the beneficiaries is the solar lantern which some of the women have really described as a tool from protection. It helps them in place of power. We make sure they keep it well charged for its use at night. The last thing we have come up with is the housing project which we have piloted in Benue State Makurdi, and we are looking forward to rolling it out in the North East starting very soon. The pilot one in Benue State is housing up to 1,000 persons because it is a 200 units of low cost bungalow house and it is something we have managed to do in close coordination with the Government of Benue State, and the Civil Society in the State, called Benue State Network of NGOs (BENGONET) is really proving to be a very good project because if you want to protect somebody it might have no meaning if the person is homeless and exposed to all elements of nature and to all possible assault. We have women who are now heads of households and so many orphaned children this is what we look forward to doing more.

Question: What call do you have for the present administration bearing in mind that it has promised to look into the issue of this menace?

Answer: It is important that the new administration galvanises itself and come up with a clear plan to end this insurgency. This is really what needs to be done right now because if it continues we will still have lives being lost and we still have physical integrity at risk and women still at risk of being adopted, and children being used as suicide bombers. This is what is just unbelievable, unimaginable, and unacceptable for any human being to even just think of the fact that a child will be put under such a condition. Children as young as less than 10 years are being used; it is terrifying so it is so crucial that this insurgency will come to an end as soon as possible. In the mean time what really need to be done is to ensure that we have feasible access to the humanitarians who can help these people, women and children who are in need of basic help.

NAFDAC DG reacts to allegations of corruption: “I’ll rather leave NAFDAC than allow impunity to thrive”

President Obama commends Ethiopian Airlines as the largest in Africa