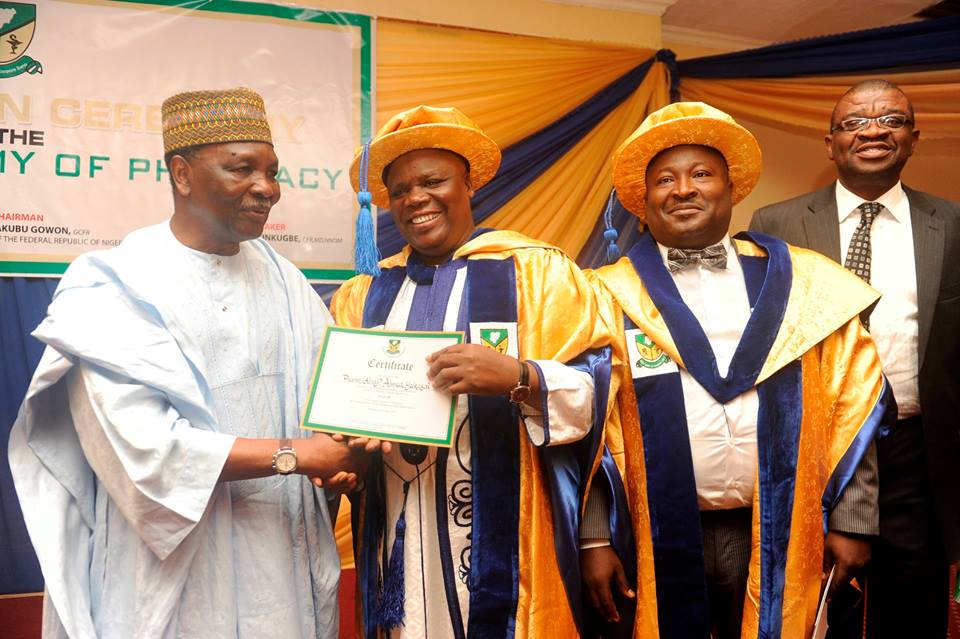 The President of Pharmaceutical Society of Nigeria, Pharm.Ahmed Ibrahim Yakasai, FPSN has been formally presented with the letter of appointment as the Honorary Consul -General of Pakistan in Nigeria signed by President Asif Ali Zardari of the Islamic Republic of Pakistan. The letter which was presented by the Pakistan High Commissioner in Nigeria, His Excellency Lt Gen Agha Umer Farooq, (Rtd) at a well-attended investiture ceremony at Meena event Centre, Nassarawa GRA Kano.

The historic event which started around 4.30pm on Saturday the 21st of November 2015 with the National Anthems of both Nigeria and Pakistan has in attendance the following: the Executive Governor of Kano State, H.E DR Abdullahi Umar Ganduje ably represented by the Deputy Governor of Kano State, Prof Hafiz Abubakar, the Executive Governor of  Jigawa State and Sardaunan Ringim H,E Alh. Muhammad Badaru Abubakar; the first two term Executive Governor of Kano State, and former Federal Minister of Education and Sardaunan Kano, Malam (Dr.) Ibrahim Shekarau, former Military Administrator of Jigawa State, Col Abubakar Zakari Maimalari (Rtd). Others are the Emir of Kano, His Royal Highness Alh(Dr)Mohammadu Sanusi II ably represented by the His Highness the Dan Amar of Kano and District Head of Bebeji, the Dan Adalan Kano and District Head of Tofa, the Makaman Kano and District Head of Wudil, former  and present civil commissioners, permanent secretaries, business Moguls, captains of industries, labour leaders, members of the diplomatic corps form both Pakistan, Tunisia, Benin Republic and so many others.

In his address, the Pakistani High Commissioner in Nigeria, His Excellency Lt Gen  Agha Umer Farooq, (Rtd) opened up with extolling the maximum corporation his country has enjoyed from its diplomatic relationship with Nigeria for decades. According to him, the traditional goodwill span through capacity building, energy, science & technology, pharmaceutical, healthcare, agriculture and a host of others. He expressed the hope that Nigeria and Pakistan could achieved a lot together in the years ahead as it is about to strengthen the diplomatic ties between both countries. This could be seen in the diplomatic assignment it is giving a Nigerian citizen, the first of its kind in the age long history of West Africa.

While formally performing the investiture rites on behalf of President Zardari of Pakistan, Gen Farooq (Rtd) noted that Pharmacist Ahmed Ibrahim Yakasai merits the honour on the basis of his strong capacity to build bridges of understanding and co-operation to promote economic and human resource development between two communities. He said from this moment on, Pharmacist Yakasai is not only owned by Nigeria but also by Pakistan and the whole world. In thanking the PSN President for accepting the diplomatic assignment, the soldier cum diplomat hinted that this will open new opportunities to empower people from both Nigeria and Pakistan.
In his acceptance speech, the new Honourary Consul-General who doubles as the President of Pharmaceutical Society of Nigeria, Pharm Ahmed I Yakasai thanked the Almighty God, the President of Pakistan and Nigeria and the members of the Pakistan diplomatic community for the honour done him. He traced the history of his wonderful relationship with the Pakistan over a period of over 15 years ranging from business to establishment of community hospital. This among many other selfless services to humanity culminated into crowning him with this honour. He noted that this is a very rare honour done to Kano, Nigeria, Africa and the world and promised to uphold the confidence reposed in him. Continuing, he pledged his sustained commitment to serving humanity anywhere he finds himself. This is exemplified is his relinquishing the more lucrative and highly paid consultancy jobs in many organizations for a lower paid assignment of a Commissioner in Kano from 2005 till 2011.

Speaker after speaker took turns to speak at the occasion extolling the qualities and showering praises on A.I. Yakasai. The first to speak was His Royal Highness the Emir of Kano Alhaji (Dr.) Muhammad Sanusi II whose message was read by His Highness the Dan Amar of Kano. He thanked the government of Pakistan for the rare honour done to their illustrious son and urged him to continue in his unique service to humanity which he is, and has always been known for. While also adding their own voices, the Executive Governors of Kano and Jigawa States spokes extensively on the man Ahmed Ibrahim Yakasai whom they know both personally and by reputation. They expressed strong confidence that the right choice for this position on the soil of Africa has been made by the government and people of Pakistan. Governor Badaru Abubakar of Jigawa State, remarked that Ahmed Yakasai does not only belong to Kano State but also Jigawa State and to the entire world. He prides himself of the rare privilege of knowing Yakasai and associating with him the years past.

In performing the rites of the vote of thanks, the former Executive Governor of Kano and former federal minister of education, Malam (Dr.) Ibrahim Shekarau was very generous and radiant in his speech. The erudite educationist and politician adorned in his trademark ended his speech with as interesting story thanking everyone present and for those present to convey his thank you message to all and sundry. In his new diplomatic assignment of Honorary Consul-General of Pakistan in Nigeria which he admitted will not in any way disturbs the discharge of his duties as President of Pharmaceutical Society of Nigeria.

PSN is one of the issue leads in the Civil Society Organizations (CSOs) Coalition, Partnership for Advocacy in Child and Family Health (PACFaH) which is leading in Nigeria in advocacy to improve domestic resources for child and family health.

We Are in This Boat Together