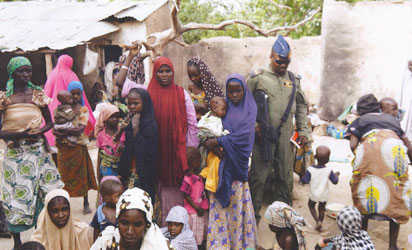 The National Emergency Management Agency (NEMA) has called for quick deployment of trauma management experts to counsel the 275 women and children at the Internally Displaced Persons (IDPs) camp in Yola. It was reported that the Nigerian Military on Saturday handed over the IDPs, who were rescued from Boko Haram camps. The inmates are currently at the Malkohi camp in Yola for rehabilitation.

The camp Coordinator, Alhaji Sa’ad Bello, on Wednesday in Yola, told the Newsmen that the victims require urgent services of trauma experts.

Bello called on relevant experts to urgently volunteer their services, to ease the stress of the inmates and fast track their healing process.

“Following the official hand over of the rescued women and children by the military to the agency we noticed that almost all the victims are suffering from serious trauma cases.

“While the children are suffering from acute malnourishment.

“The agency is, therefore, urgently calling for assistance from voluntarily medical counseling experts to the camp.” Bello said.

The camp coordinator disclosed that there were six pregnant women and 21 nursing mothers among the rescued victims. He said 158 among the victims were found to be suffering from different ailments after medical checkup on them on arrival at the camp.

The coordinator said that 60 males aged zero to five and 26 others of six to 17 years were also registered by camp officials. Ms Ruth Ugwu, a nurse working with UNICEF at the camp, told newsmen that about 31 of the children were suffering from acute malnutrition “while some are suffering from eye infections and dehydration”.