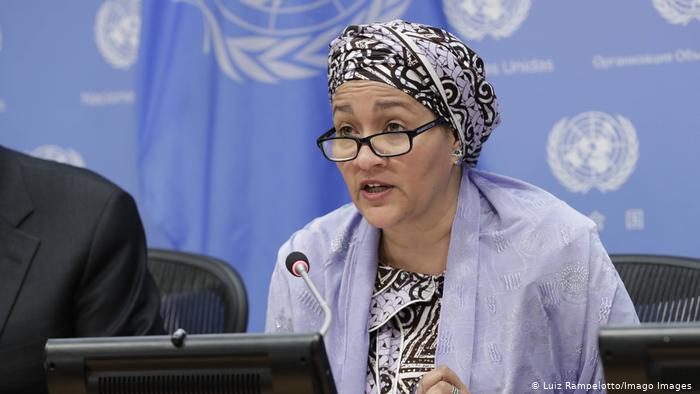 The United Nations Deputy Secretary-General, Amina Mohammed, has said the global economy is under severe stress and the Sustainable Development Goals (SDGs) are in “need of urgent rescue.

UN member states adopted the 2030 the agenda as a peace and prosperity blueprint with 17 SDGs to be reached through a global partnership.

The UN General Assembly set the goals with a target date of attainment fixed at 2030.

Amina Mohammed told the Financing for Development Forum on Monday in New York that financing for developing was an essential part of the solution.

Deputy secretary-general, who spoke on behalf of the UN chief, Antonio Guterres said that so far, the global response had fallen far short.

She said many developing countries were reeling from the crippling effects of an uneven recovery from the COVID-19 pandemic and the ticking time bomb of the climate crisis. Vaccine inequities continue.

“The war in Ukraine is now sending shockwaves through global food, energy and financial markets.

“Many economies are at the brink of a downward spiral of insolvency, cuts in critical investments, economic contraction and rising unemployment.

“Decades of development progress are being eroded.  The World Bank predicts that a quarter of a billion people could be pushed into extreme poverty this year,’’ she said.

According to her, up to 323 million people could face acute food insecurity, noting that the essential transition to clean and sustainable energy is at enormous risk.

The top UN official said there were early signs of a tsunami of potential debt crises, deprivation, discontent and civil unrest, adding that no country, developed or developing, will be isolated from the socio-economic impacts.

She, however, told the participants that the Global Crisis Response Group on Food, Energy and Finance was established to ensure high-level political leadership.

She also said the Group was established to get ahead of the food security, energy, and financing challenges; and implement a coordinated global response.

The President of the Economic and Social Council, Collen Kelapile, at the Forum, briefed the participants on increasing array of interrelated global crises that underline that no country, rich or poor, is immune to external shocks.

He said that the SDGs were facing perhaps the “greatest threat” since their adoption.

“COVID-19 has exacerbated trends that are contributing to ‘cataclysmic effects’ on development, and the poorest and most vulnerable are impacted the greatest.

“Millions of people around the world have been pushed deeper into extreme poverty. Inequality is rising, and the gap between developed and developing countries is growing,” the senior UN official said.

He spoke on the impacts of carbon emissions on global climate, along with a geopolitical crisis that is driving refugee flows, causing severe disruptions on global supply chains for essential commodities and contributing to food insecurity in parts of the world.

The ECOSOC president, however, described the Forum as “the global platform we need to advance action on these challenges,” noting its universal participation.

As a Forum that “unites us”, and with a track record of “delivering consensus,” he called for an “ambitious outcome, that demonstrates the solidarity of Member States in these trying times.”

“It is only through urgent and coordinated action that we can mobilise the resources that will turn the trajectory around, lift people out of extreme poverty, prevent the worst effects of climate change, and achieve the SDGs,” he said.