Top Posts
AfDB secures $15.6bn investment for construction of Lagos-Abidjan...
WHO advocates holistic approach to hand washing
UN Deputy chief to attend COP15 in Abidjan...
WHO confirms death of 3rd Ebola patient in...
Global food prices down by 0.8% in April...
Hand hygiene can prevent 70% infections – WHO
COVID-19: US limits use of J&J vaccine due...
South Africa’s daily COVID-19 cases soar 50% in...
Invest in nursing profession to reduce migration –...
Cognitive impact of COVID-19 equivalents to 20 years...
Home Features The Stevens, Family of 72 rescued from Death
Features

The Stevens, Family of 72 rescued from Death 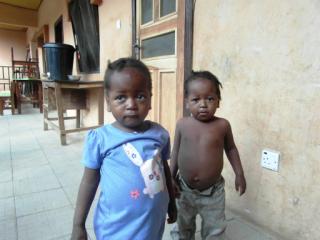 “Our lives have never been the same, in the place of their birth they are called evil children we take them in and call them Stevens and everyday God bless us”

Olusola and Chinwe Stevens have 72 children to cater for, giving them the best of parental care, love, and even providing quality eduction. The family has two 18 seater Toyota Hiace bus, it uses to take the children, those above the age of two to school, from Kiyi village in Kuje Area Council Abuja to Gwagwalada, the children’s school.

Like every father, Mr. Olusola Stevens has made it his daily routine, take them on a one hour drive from Kiyi to Gwagwalada-school in the morning, 7 am, and bring them back home 4. Pm, “it is a time I look forward to, because it is always existing and I love doing it, when they see me drive into their school, the atmosphere in the school changes, it makes me feel like a proud father”

About 45 of them currently in primary and Secondary School. The oldest 19, in SS1, while the youngest are four months Mary and Matilda, a set of twins, Mrs. Chinwe Stevens nurtures with milk-breast supplement among six other newborns.

Only one, out of the 72 Stevens children sucked their mother’s breast.   The only biological child, who was born and raised with the other children rescued from death, and clutch of evil and uncivilised 21st century cultural Practise.

The Stevens, a Christian Mission Foundation missionaries, continued from where Mary scillessor, the white missionary who halted the killing of twins in Nigeria stopped. The Stevens story and experiences shows that the Scillessor’s mission in Nigeria was only “halted” and not “stopped” after Nigeria made her another martyred  missionary in history.

From the experiences of the missionary work,  preaching the gospel in interior communities of the FCT the stevens heard about the killing of twins “we said we can’t close our eyes to the fact that children are dying so that is how we came about keeping the children and started the Vine Heritage home” said Mr. Stevens

“When you preach and get to some of these rural areas in the FCT where their lives are in danger, it entails rescuing twins from some of those rural areas in the FCT, their lives are endangered due to traditional beliefs that they are not proper children so when they are given birth to they are either killed by poisoning, or are abandoned without been cared for or fed. In most cases their mother do not breastfeed them. The other case is where the mother delivers a baby and dies in the process of delivery or even the child is still sucking as long as the child is still sucking and the mother dies they believe that the child is evil and responsible for the death of the mother,  in extreme cases if they want to bury the mother they bury the child with the mother in some instances they are left unattended to in the village because they are tagged evil child and no one want to identify with them. The other case is that during teething period for children we know that one out of fifty children when they start teething one is likely to grow the upper teeth first, but to them it is bad omen’ these are some of the practices that when we hear we go in there  to rescue the children, we go with the children when they agree to give us, but when they don’t the child is left to die”  Mr Stevens narrates.

What began as a rescue for one child in 1996, 19 years down the line turned to a “profession” Mrs Stevens a University Lecturer had to resign from her job to take care of these children, with some helping hand from grown up children of other missionaries working in very remote communities in almost 40 unexplored villages in “very civilised” FCT and those working in North-East Nigeria giving succour to people displaced by Boko Haram’s insurgency.

Esther, a 25 years old OND graduate, has her parents working in Borno, the Vine Heritage rescue home is where she is, helping the Stevens with the Children below one year, she changes their diaper every 30 minutes, feeds them, and tidy their dormitory. For Esther, “the children are gift from God, I feel inner peace when I take care of them”

One of such communities listed by National Orientation Agency, (NOA) Kaida Sabo, a village in Gwagwalada Area council, fears no hardship. In fact, it thrives despite having no water, road or health centre.
But it fears its twin babies.
A family has twin babies and God takes one away, explains a resident. “Before you know, the [dead mate] will come and call him [the living twin] and both will go.”
The dread of twins made twin babies terrors to beware, and easy targets to watch out for. Twin babies were marked out, amulets tied around their wrists for identification. The reason: to make them stay alive. “If you don’t tie it, if they are not happy with the family, they go back and leave,” explains the resident. “It was the belief.” Beyond Kaida Sabo, in communities deeper inside remote Kuje, Kwali and Abaji area councils, the dread of twins have resulted in their killing. Villagers however, hardly admit it, and telltale signs are easy to misread, but Investigators insist the practice is still ongoing.

“No. We don’t do it,” says Suleiman Ismail emphatically. Instead twin babies are looked on “like stubborn children,” he says.
“They fear them. If they need anything, the parents must provide it, because they have spiritual powers. They give them total attention, because they see them as special children,” he insisted.
And if you don’t, what happens? he’s asked. “It is the tradition,” he answers. “Even that is changing now. That was then.”
Kaida Sabo paints the picture of backblocks Nigeria caught between holding onto its traditions and riding the tide of modernity. in hundreds of years, the mostly Gwari community, dominated by the Gbagyi tongue, has only dipped a toe in modern Nigeria, never swept along.
The brash development that’s turned the nation’s capital into a growing concrete jungle has rubbed on Gwagwalada but eludes Kaida Sabo.

The first place to visit is the gidan sarki (palace or house of the king). Its occupant is Yakubu Magaji, an amiable elderly man. His voice rings clear as a news broadcast in his native Gbagyi tongue, and his typical “zh’s” are crisp.

He offers his visitors a drink of water in courtesy. Not sachets, not in a clay pot or calabash. The water is in a stainless steel bowl, and it is brown as dirt. His visitors return the courtesy and sip from the bowl. “The water you that you take is sample. There’s no drinking water in this huge kaida sabo community,” says the sarki. “All [the water] is like this. There’s even some that is worse than this.”
It is dry season and the river through the community has run dry. The river bed is bare, apart water pooled in pockets in some sections of the bed. Women and children launder family clothes in a large pond. Young girls scoop water from another pond, green with spirogyra and lichen.
The riverbed is dotted by droppings from cattle crossing, marked by tyre tracks of trucks driving through. Residents have also defecated in the open here, a common practice in rural communities as Kaida Sabo.

On a stretch of brown riverbed sand, a young child digs sand with his hands. In minutes, the hole in the sand gets bigger and deeper. The hole rests and gradually, ground water rushes in from underground to fill it. That’s how Kaida Sabo gets its water.
And there’s no treatment at all, says Ismail. “We just use it like that, for drinking, cooking, bathing, anything.”
Falling ill is not an option. The village has no health centre. For years, its health was maintained out of a portable health centre, but rains destroyed it last year.

“If anybody is sick here, we must carry him to Dobi,” says Ismail. “What if is an emergency?” The lone health centre is in Dobi, a ward that administratively includes Kaida Sabo. Dobi is around 40km from Kaida Sabo, but bad road means the travel time is same as a trip from Abuja to Kaduna.
“The road is not good. When it rains, you cannot climb machine to Dobi, talk more of using motor.”
The lone secondary school is in Dobi too, so Kaida Sabo’s children must trek long hours to school or stop only at primary school.
Ismail has been out of the community, graduated from FUT Minna, and now back home waiting for work. He speaks good English, interprets English questions in Gbagyi and Hausa for his community. But the much change he sees is very little. The fathers of Kaida Sabo once wore just loincloths. “They cover their private parts and most of them remain naked, even [walking] from their farms,” he says. “They didn’t care about clothing.”

The changes haven’t cost Kaida Sabo its tradition. Some still are, says Magaji. But his community is still forgotten—remembered only when teams of supporters invade to staple campaign posters on trees, forgotten once voting is over. Along with other villages beyond it—Dawaki, Kwalita, Pete, Ashara, Darko, Warambi, Tudun Wasa. Several pleas to council authorities have gone unheard, says Asabe, a mother who packs vegetables to Dobi daily for sale. Her children have permanently moved there to attend school. The official response was to bring water tanks into the community, but not everybody gets it, says Asabe.

“There are many villages under us. If Kaida doesn’t have drinking water, health care, good road, they too will not get,” says Magaji.
Not even schools. Though he hopes Kaida Sabo’s children can step into the gap eventually.

In the FCT, over 40 villages share the same story as Kaida, the likes of Chibiri, Kiyi, Kutara and many others, the NOA however has discovered 22 out of 40 communities, campaigning against the killing of twin babies with posters of its awareness messages littered on the on walls of some thatch houses.

For Mrs. Mary Madu, Head, Child Rights Bureau, federal Ministry of Information, awareness is the only exist root to such cultural practises,
“From all we have discovered, these are cultural practises that have to be condemned, and we cannot use force to achieve it  if you do, they go under ground and that will be more disastrous for us, but those innocent chidren have to be saved”

New Warehouse in Nigeria to reduce cost of Drug Maintenance