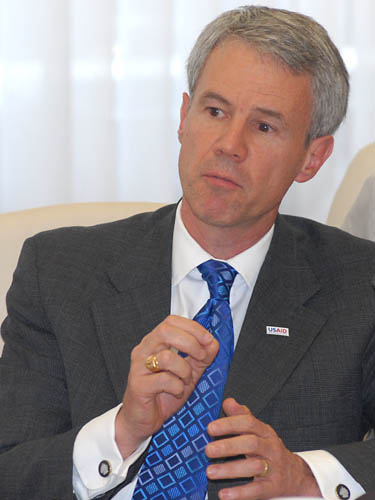 The U.S. Agency for International Development (USAID) has spent over 89 million dollars on the Targeted States High Impact Project (T-SHIP) in Sokoto and Bauchi states in the last six years, an official said. The Nigeria Mission Director of USAID, Mr Michael Harvey, made the fact known in Sokoto on Thursday at the End of Project Dissemination Meeting of the USAID sponsored T-SHIP.

He said 45 million dollars was spent on T-SHIP project in Sokoto State from 2009 to 2015 and 44 million dollars spent in Bauchi State during the same period. Harvey said that T-SHIP had made tremendous impact in reducing child and maternal mortality in the two states.

He said although the project would end within the month, USAID would partner the state governments to develop a new project for the benefit of the people. Gov. Aminu Tambuwal of Sokoto State said the state government planned to train 3,000 midwives to boost the manpower in the health sector in the 23 local government areas of the state.

“In Sokoto, we face the challenges of human resources and access to health services supply across the state.

”This has in turn resulted in high maternal and infant morbidity and mortality, low immunization coverage, low antenatal attendance and high home deliveries.

“So, this administration will train 3,000 midwives in the short term to tackle the ugly trend,”Tambuwal said.

He restated the commitment of his administration to strengthen the health system by procuring additional life-saving drugs.

Also, the Chief of Party T-SHIP , Dr. Nosa Orobaton, said the project had saved the lives of 6,313 women and babies. The Sultan of Sokoto, Alhaji Sa’ad Abubakar, represented by the District Head of Hamma’ali, Alhaji Muhammadu Bello, commended the project for its sustained efforts to save the lives of pregnant women and new-born babies. The State Chairman of the Ward Development Committees’ forum, Alhaji Tambari Aliyu, said ” some women were dying during the first 40 days of child birth. This is no longer the story in the state as a result of the project.

” More women are now attending antenatal clinics, while more pregnant women are now being delivered of their babies in the health facilities,” he said.