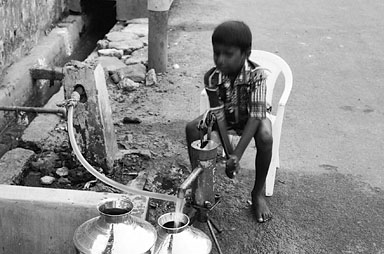 The residents of Abakaliki are presently experiencing serious difficulties in accessing water either from the public water supply or private sources. The report revealed that some residents, especially youths carry as many as four ‘jerry-cans’ in wheel barrows in search for water. Chike Ubah, a student, told newsmen on Tuesday that he fetched water up to five times every morning from a borehole several kilometres from his residence to meet domestic needs.

“We have not got water from the public water source in our home and those in our street since November 2014.

“The only water borehole in our street has stopped functioning and those who have functional boreholes have increased the price.

Justifying the increase in the cost of water, Mr Abel Agu, a bore-hole owner, said that the effects of the dry season and irregular power
supply from the Enugu Electricity Distribution Company (EEDC), caused the increment.

“It is generally difficult to pump water during the dry season and the severity of the condition this January in the state made the situation worse.

“The poor rate of power supply from the EEDC, makes me to spend much in purchasing diesel for my generator as the slight increment was out of benevolence because the supposed cost for one jerry can is N20,” he said.

Mrs Angela Ikeh, a housewife, lamented that in spite of the non-supply of water from the public source, the authorities still imposed high water levies on residents.

“We still pay heavily for unconsumed water as the well water in our residence has long dried.

“We urge the government to address the situation as provision of water is one of ways to gain the trust of the electorate, especially during this electioneering period,” he said.

Mr Osmond Igwe, General Manager of the State Water Corporation, said the scarcity was caused by mechanical breakdown at the Ezillo Water scheme, the main source of water supply in the state. “The breakdown has lasted for two weeks as only one distribution pump is functioning. “The problem might persist until both major pumps are functioning as the volume of water in the scheme’s tanks is not enough to distribute water to everyone,” he said.

He noted that the Oferekpe Mega-Water Scheme would soon be functional as the control valve needed to regulate water surge had been imported from Israel and was awaiting clearance at the wharf. “The valve will protect all systems in the water scheme as the government does not want the over N10 billion project to be moribund,” he said.

“The people may resort to accessing water from unhygienic sources thereby exposing them to great health dangers,” he said.

Chief Ben Okah, the Commissioner for Public Utilities, noted that the Oferekpe Water Scheme would be operational by the end of January. “The government wants to ensure that the protective device is installed at the water scheme,” he said, urging the citizens to be patient and support the government to meet all their water needs,” he said.