WHO confirms death of 3rd Ebola patient in DR Congo 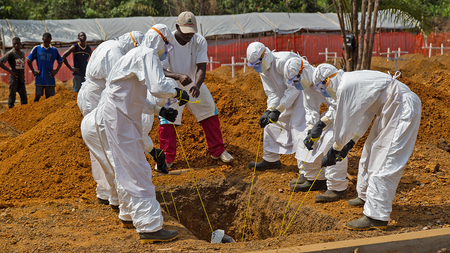 World Health Organisation (WHO) has confirmed the death of third Ebola patient in northwest Democratic Republic of Congo (DRC), the latest fatality in an outbreak first reported in April.

The first case was reported on April 23 and a total of three deaths have been confirmed so far.

A 48-year-old man is the most recent confirmed case in Congo’s 14th outbreak of the hemorrhagic fever, which has hit the city of Mbandaka, the capital of Equateur province.

A tweet by WHO Regional Office in Africa, says: “Responders have identified 444 contacts and continue to monitor their health.”

Health workers started Ebola vaccinations last week and have since inoculated over 350 people, of which more than 250 are contacts, the WHO said.

DR Congo has seen 13 previous outbreaks of Ebola, including one in 2018-2020 in the east that killed nearly 2,300 people, the second highest toll recorded in the disease’s history.

This is the 14th Ebola outbreaks in the Democratic Republic of the Congo since 1976.

The new outbreak is the sixth since 2018 – the most frequent occurrence in the country’s Ebola history.

Previous outbreaks in Equateur Province were in 2020 and 2018, with 130 and 54 recorded cases respectively.