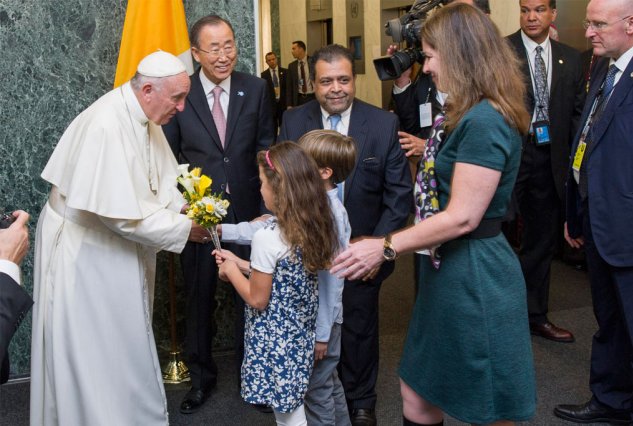 “We have a big, bold agenda before us – now we must work to make it real in people’s lives everywhere,” said United Nations Secretary-General Ban Ki-moon, ahead of the gaveling of a new agenda for sustainable development.

“It is a roadmap to ending global poverty, building a life of dignity for all and leaving no one behind. It is also a clarion call to work in partnership and intensify efforts to share prosperity, empower people’s livelihoods, ensure peace and heal our planet for the benefit of this and future generations,” underscored Mr. Ban.

The new agenda is people-centred, universal, transformative and integrated. It calls for action by all countries for all people over the next 15 years in five areas of critical importance: people, planet, prosperity, peace and partnership. The agenda recognises that ending poverty must go hand-in-hand with a plan that builds economic growth and addresses a range of social needs, while tackling climate change.

The opening ceremony  which is ongoing at the moment started  at 10:50am EDT (GMT-4) on 25 September, with the film screening, “The Earth from Space,” followed by musical performances by UN Goodwill Ambassadors Shakira and Angelique Kidjo, as well as a call to action by Nobel Laureate Malala Yousafzai along with youth representatives as torch bearers to a sustainable future.

The SDGs, proposed by the Open Working Group, are the result of a three-year-long transparent, participatory process inclusive of all stakeholders and people’s voices. Many stakeholders, especially youth, were also involved from the beginning on social media and other platforms, including the UN’s global MyWorld survey that received more than 8 million votes from around the world, with approximately 75% of participants under 30 years of age.

The 17 SDGs and 169 targets of the new agenda will be monitored and reviewed using a set of global indicators. The global indicator framework, to be developed by the Inter Agency and Expert Group on SDG Indicators, will be agreed on by the UN Statistical Commission by March 2016. Governments will also develop their own national indicators to assist in monitoring progress made on the goals and targets. The follow-up and review process will be undertaken on an annual basis by the High-Level Political Forum on Sustainable Development through a SDG Progress Report to be prepared by the Secretary-General.

The sustainable development agenda builds on the successful outcome of the Conference on Financing for Development that was held in Addis Ababa, Ethiopia, in July this year. It is expected that it will also positively influence the negotiations towards a new, meaningful and universal agreement on climate change in Paris this December.