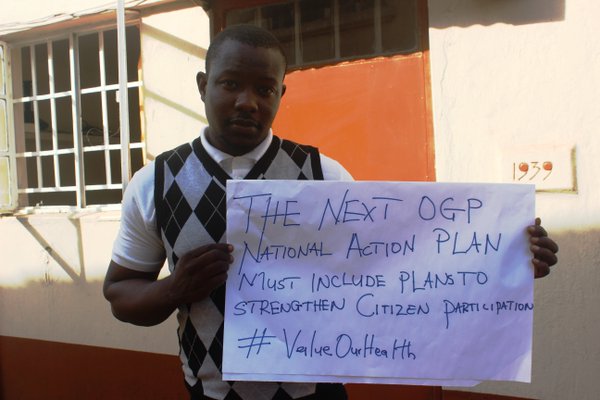 #ValueOurHealth campaign which theme is ‘open and participatory budgets lead to more and better health spending for women and children’ is calling on all governments in Sub-Saharan Africa to take urgent action to increase access to budget information and to provide more opportunity for public engagement in the budgeting process.

In his opening remarks, the Chairman of the launch, the Chief Executive Officer (CEO) of Focus 1000, Mr. Mahammad Jalloh explained that issues relating to budget are a very critical one.

“Let me also note that Sierra Leone is in a critical period, we have just gone through an Ebola phase, if there are any lessons learnt the importance of community participation, engagement and ownership is key.”

“Seeing the ugly statistics of Sierra Leone, we are having one of the highest maternal mortality rates in the world, that our illiteracy rate is one of the highest but the good news is that we can turn around the situation if we want to, if we have the commitment; if we have the resources and accountable for those resources, then we can make a difference in the lives of our women and children,” he emphasized.

Explaining on the challenges on budget transparency and participations in Sierra Leone, Budget Advocacy Network (BAN) representative, Abu Bakarr Kamara explained that even though the government has improved budget openness since 2012 by publishing a citizens’ budget and also making key documents more comprehensive, much more progress is however needed.

He further explained that #ValueOurHealth believes that publishing key documents and public participation in the design and implementation of health budgets leads to more and better health spending.

“We care about how much is spent on different health programmes because we want better levels of health and well-being for ourselves and the country. The reason why it is important to engage in debates over our health budget is that the government has not met its commitment to allocate 15% of its budget to health,” he said.