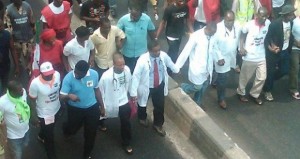 The age-long controversy between the Nigerian Medical Association and the National Union of Allied Health Professionals over who should bear the title of a ‘consultant’ appeared to have been laid to rest with the Federal Government granting the approval for health workers to become consultants in the various fields.

The government has issued a circular to announce the development.

The news is however coming at a time the Joint Health Sector Union, a unified body for all associations in the health care sector, said it was warming up for a fresh strike.

The Vice President of JOHESU, Mr. Felix Faniran, in an interview with journalists in Abuja on Sunday, said, “We held a meeting with the Secretary to the Government of the Federation, Anyim Pius Anyim, on Thursday; the government only released one of the many circulars we told them to release. The one they released was the one in respect of consultancy status which we say they should correct and which they have now corrected.

“Other health care professionals are recognised as consultants and that it is their professional bodies that have the right to dictate who should be a consultant or not and not the Medical and Dental Council of Nigeria and that such people shall be qualified to receive specialist allowance. That is what we have gotten.”

He however said that JOHESU would be embarking on a fresh strike because doctors had been receiving new salary structure to the detriment of other health workes.

Faniran said, “We are in the same sector but they are enjoying new salary while we have not gotten the circular yet, let alone implement it. Also, this is already November, budgets have been prepared in all institutions and ours have been prepared on old rate, so we can no longer wait.

“Since the government don’t have an answer to this and the arrears of CONHESS 10 skipping, they also have no answer to it. It was supposed to be paid in 2013, they could not pay, we waited till 2014, they said it was not in the budget for 2014 and that we have to wait till 2015, we are tired of all these.

“On the issue of retirement age, we don’t need to argue on this one. There has been a government White Paper in 1981 that whatever is happening in the universities should be the same condition of service in the university teaching hospitals.