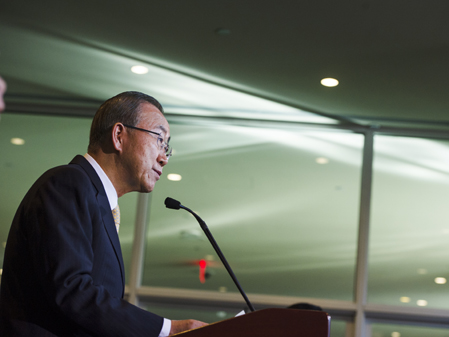 U.N. Secretary-General Ban Ki-moon revealed Thursday his vision for the post-2015 development framework that will replace the Millenium Development Goals when these expire at the end of next year.

Ban told the U.N. General Assembly that the world body is poised to usher in an “era of transformation” that places “people and the planet” at the center and “underpinned by human rights” as it develops the new agenda.

The U.N. chief also presented a “synthesis report” which he said will guide discussions on drafting the final sustainable development goals led by Ireland and Kenya.

The report, entitled “The Road to Dignity by 2030: Ending Poverty, Transforming All Lives and Protecting the Planet,” contains six focus areas — dignity, people, prosperity, the planet, justice and partnerships — as well as 17 goals and 169 targets.

Journalists pressed Ban on whether the U.N. is overreaching by setting an unrealistic number of goals at a press conference after the remarks.

The secretary-general defended the decision arguing that the report is a two-year compilation of research by member states, the United Nations, experts, civil society and “millions of people,” but did not clarify if all 17 goals will end up in the final agenda, leaving that up to the member states.

“While I welcome these 17 goals and 169 targets, I also note in particular the possibility of … some rearrangement — this is up to the member states,” Ban said.

In initial official reactions to the U.N. chief’s assessment, most global development officials noted it offers a holistic view of development and praised it for focusing on reducing inequality, although some pointed out how certain aspects such as labor mobility and trade did not receive the attention they deserve.

After the full report is released on Dec. 31, negotiators will continue the debates on the global development goals ahead of a major conference set for July next year in Addis Ababa, Ethiopia, where world leaders will meet to figure out how to finance the post-2015 development framework.