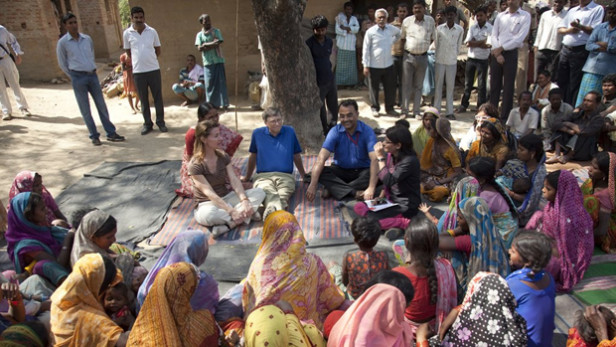 Bill and Melinda Gates have their own version of the State of the Union, and they’re using it to spread some optimism about the next 15 years — and to mobilize a coalition of “global citizens” who care about the post-2015 development agenda.

The Gates Foundation’s 2015 annual letter, released Thursday, concludes with the launch of an online advocacy effort called “Global Citizen.” The campaign aims to connect ideas and people so that, collectively, they can persuade governments, companies and nonprofits to prioritize efforts to improve the lives of the poorest people.

“We hope this effort will help these groups grow, building the movement of global citizens. Their millions of members are also global citizens, working on different global problems,” the letter notes.

Those global problems include a list of several “breakthroughs” the organization’s co-founders believe the international community can achieve in the next 15 years. They include:

1. Fifty percent drop in child deaths, and the eradication of more diseases “than ever before.”
2. Farming innovations will help African farmers double their yields.
3. Mobile banking services will be transformative in helping poor people gain financial access and control.
4. Online education will be fundamental in helping close the skills gap in developing countries.

The breakthroughs the Gates hoped for are more specific than U.N. Secretary-General Ban Ki-moon’s synthesis report, which laid out his vision of the sustainable development goals. The secretary-general’s list had 17 different goals, including such encompassing ideas as ending hunger and poverty “in all its forms everywhere,” achieving food security, improving nutrition and promoting sustainable agriculture.

The Gates breakthrough around hunger and food security comes in the form of a prediction: “Africa will be able to feed itself” by 2030.

The Gates’ letter takes a defiantly optimistic tone, asserting that they have put their “credibility, time and money” behind a “big bet,” which is that “the lives of people in poor countries will improve faster in the next 15 years than at any other time in history. And their lives will improve more than anyone else’s.”

It also comes at a point of reflection for Bill and Melinda Gates, who co-founded the foundation 15 years ago and so have seen their own accomplishments and challenges proceed in parallel with those of the Millennium Development Goals. While it doesn’t speak about specific budgetary or programmatic shifts at the Gates Foundation, the 2015 annual letter — and its Global Citizen announcement — signals the organization’s formal entry into a year of negotiations, goal setting and attempts to balance aspirations with practical constraints.

The letter also points out that while the Gates’ acknowledge climate change is a pressing concern, which could “stifle” the progress they’re predicting, it is not a core aspect of the foundation’s portfolio, Bill, however, “is investing time in [clean energy] work personally.”

While many expect the sustainable development goals will look to integrate challenges of health and development more closely with those of climate and environmental change, the Gates’ seem optimistic their breakthroughs — at least in the short term — can occur in spite of them.