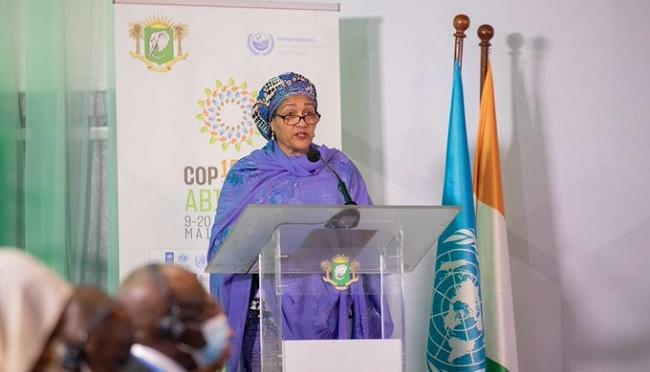 The United Nations on Monday called on countries to invest in land restoration initiatives.

UN Deputy Secretary-General, Amina Mohammed, made the call at the opening of the15th session of the Conference of Parties (COP15) to the United Nations Convention to Combat Desertification (UNCCD) in Abidjan, Côte d’Ivoire.

She noted that half of the world’s Gross Domestic Product (GDP) and its grain supplies depended on addressing land degradation.

“We are faced with a crucial choice. We can either reap the benefits of land restoration now or continue on the disastrous path that has led us to the triple planetary crisis of climate, biodiversity and pollution,” she said in a statement.

Quoting recent data, she said every year 12 million hectares of land were lost.

“The Global Land Outlook report just issued by the UN Convention to combat desertification shows that our current approach to land management is putting half the world’s economic output-44 trillion dollars- at risk.

“We must ensure that funds are available for countries that need them, and that those funds are invested in areas that will have a decisive impact and create a more inclusive, sustainable future for all,” she continued.

Amina noted that land restoration connected all of the Sustainable Development Goals (SDGs).

With a focus on restoring one billion hectares of degraded land between now and 2030, the conference aims to contribute to future-proofing land against the climate impacts, and tackling escalating disaster risks such as droughts, sand and dust storms, and wildfires.

The deputy secretary-general said despite that, women spent 200 million hours each day collecting water, and even more tending the land, they still lacked access to land rights and finance.

“Eliminating those barriers and empowering women and girls as landowners and partners is a game-changer for land restoration, for the 2030 Agenda, and for the African Union’s Agenda 2063,” she said.

Also speaking at the Summit, General Assembly President, Abdulla Shahid, emphasised the importance of addressing the serious issues affecting the well-being of people and their livelihoods, and of the environment.

“Through it, we aim to move closer, to combating desertification and restoring degraded land and soil, including land affected by desertification, drought, and floods,” Shahid said.

According to him, reversing the current trends is vital for effective action on behalf of climate and biodiversity, especially to vulnerable communities, noting that land degradation undermines the well-being of some 3.2 billion people.

“Unsustainable land use, agriculture and soil management practices are all major drivers of desertification, land degradation and drought.

“We are responsible for the bulk of this, considering that human activities directly influence 70 per cent of the world’s land,” Shahid said.

The UN top official called on all the parties to recommit to land degradation neutrality by 2030.

He said it was necessary to tackle climate change, conserve and protect biodiversity, and maintain vital ecosystem services for shared prosperity and well-being, in the context of a climate responsible world.