Cured of Ebola, Rebecca returns to cure others 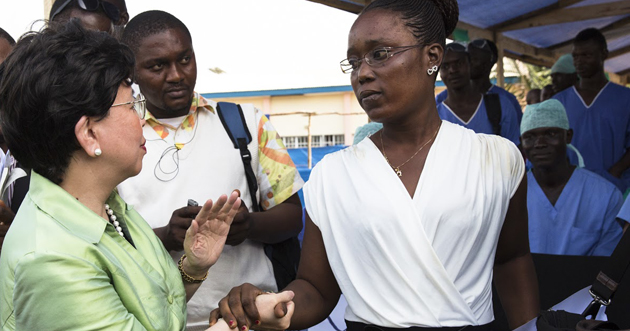 For many people, December 22 was the beginning of the holiday season. But for Rebeca Johnson, a Sierra Leone nurse who survived Ebola, it marked a return to work – and a new lease on life.

“I will take the work normally as I did before. I will wear the full PPE, but I won’t ever be scared again because I have immunity.”

Last weekend, as she prepared to return to work, she told her story to WHO Director-General Dr Margaret Chan and received a warm hug in return. “It felt good when she (Dr Chan) hugged me,” said Rebecca, “I really appreciate all you people who have come to help us.”

Now fully recovered, Rebecca always carries her hospital discharge certificate to prove her good health. “In my community, I am stigmatized and people talk about me. They say ‘there she is, she’s the one with Ebola,’ but I know I am safer than them.”

Rebecca, a 28-year-old nurse caring for people with Ebola virus disease at the Police Training School (PTS) Hastings I, in Sierra Leone’s capital, Freetown, developed symptoms of the disease herself on November 14. “My mind would not think Ebola. No, it was not possible. I was paralyzed with vomiting for days.”

She vividly remembers the shock on her colleagues’ faces when her family brought her in, not to work, but to seek treatment. “It was hard for all of us, but thank God I survived.”

Ebola can be beaten

And now, having survived the disease she is not only returning to work to care for people with Ebola but spreading the word that Ebola can be beaten. “I want Ebola to finish so we can get back to normal. My country is drowning – no schools, the economy is in ruins. It’s not easy.”