Sokoto State Governor, Aminu Waziri Tambuwal has commended the Nigerian Army for its plan to site a tertiary military hospital in Sokoto to serve as centre of excellence for military related diseases.

A statement issued on Tuesday by Tambuwal’s Spokesman, Malam Imam Imam, quoted the governor as saying that the hospital would be the first of its kind in the country. 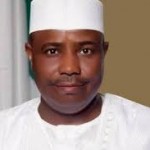 Tambuwal said that the hospital would also serve as a research institution with United Nations standard international public health laboratory. He said the government had already provided a space at the Murtala Muhammed Specialist Hospital for temporary use by the hospital pending when work on its permanent site would be completed.

Tambuwal said that some states also applied to host the facility, but Sokoto State emerged the preferred destination. “First of all, I want to inform the people of Sokoto State that our efforts in attracting important projects from within and outside the country have continued to yield positive results.

“This hospital is of great importance not just to the military, but to our people as a whole. “Diseases of military importance are areas of concern globally because of the large population of people that can be infected after outbreaks. “Such diseases are subject of importance in efforts to counter bioterrorism and bio-weapons by aggressor nations.

“These infectious diseases include, among others, dengue fever, Ebola, Lassa fever, anthrax, among others.“Having a centre in Sokoto dedicated to countering these likely outbreaks is a welcome development. “We will support the hospital with facilities and logistics to properly take off until it is fully on its feet,” he said.

Tambuwal dismissed the notion that the state government had permanently handed over the Murtala Muhammed Specialist Hospital to the military.

“We just sent a bill to the state House of Assembly to establish the Murtala Muhammed Specialist Hospital as property of the state government. Its position has not changed. “The military will use the facility pending when all facilities for the newly-established Nigerian Army’s 8 Division, Sokoto, are fully ready,” the governor said.