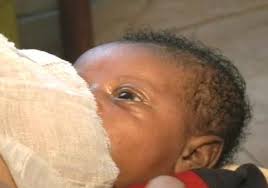 The Nigeria’s lack of progress in exclusive breastfeeding put millions of newborns at risk of malnutrition, the United Nations Children’s Fund (UNICEF) warned.

In a press statement issued to commemorate Breastfeeding Week, UNICEF decried the slow pace of Nigeria’s exclusive breastfeeding rate compared to Ghana who shared similar indices in 1994 but has left Nigeria behind in the last survey done in 2013.

The statement said more than five million newborns in Nigeria are deprived of essential nutrients and antibodies that protect them from disease and death, as they are not being exclusively breastfed.

It was gathered that approximately seven million children are born in Nigeria every year, according to the 2014 National Nutrition and Health Survey, only 25 per cent are exclusively breastfed from 0-6 months of age.

“We know that the pressure to give water to newborns in addition to breast milk is high, but the stomach of a baby is so small, it can barely hold 60 millilitres of liquid and when it is filled with water, it leaves no room for breast milk and its life sustaining nutrients,” UNICEF Nigeria Chief of Nutrition, Arjan de Wagt said.

“Babies who are fed nothing but breast milk from the moment they are born until they are six months old grow and develop better. Breast milk gives a child a head start in life and a chance to fight child malnutrition later in life,” the statement added.

By comparison, in 1994, both Ghana and Nigeria had both exclusive breastfeeding rates of 7.4, but by 2013 Ghana had moved up to 63 per cent.

Research shows that an exclusively breastfed child is 14 times less likely to die in the first six months than a non-breastfed child and that breastfeeding drastically reduces deaths from acute respiratory infection and diarrhea, the two major child killer diseases.

UNICEF also commended the initiative of Wife of the President, Mrs. Aisha Buhari, who announced in July that that exclusive breastfeeding should be a strong component of her initiative, to address child malnutrition and recommends UNICEF Representative in Nigeria, Jean Gough, noted that lack of exclusive breastfeeding is implicated in the current high rate of child malnutrition in Nigeria.