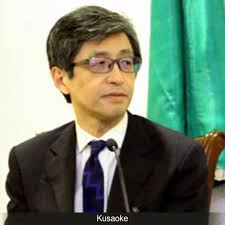 The Japanese Government has donated medical equipment worth $89, 662 to Nigeria, to help improve health status of Nigerians.

Speaking at the inauguration which took place at the Bwari General Hospital, the Japan Ambassador to Nigeria, Mr. Sadanobu Kusaoke, said the embassy had always supported Nigeria through its Grant Assistance for grassroots human security project scheme.

He said 152 projects had been implemented since 1998 under primary health, primary education and agriculture with 10. 4 million dollars disbursed so far.

“We are handing over 25 types of medical equipment and tools today to Bwari General Hospital. Large number of people come from Abuja, Kaduna and Niger to the hospital every day, but it could not provide patients with appropriate services because of lack of medical equipment.

“The shortage of equipment, in the worst cases, caused many babies and pregnant women to die despite the fact that their lives would have been saved with just one sort of equipment. Responding to the request from the hospital through Women’s Right to Education Programme, wehave taken action to bridge the gap and now successfully completed the project.

“We strongly wish that the medical equipment provided by the government of Japan will contribute to the reduction in child and maternal mortality in Bwari, as well as neighbouring areas,” he said.

He enjoined the hospital’s management to utilise the equipment properly to the benefit of many people.

The Medical Director of the Hospital, Dr. Osayande Osagie, commended Japan for the gesture, saying it would help promote universal health coverage.

He said he is convinced that the donation will go a long way in achieving the World Health Organisation’s (WHO) set standards of Universal Health Coverage.

Executive Director of Women’s Right to Education Programme (WREP), Ms. Mimido Achakpa, said the choice of Bwari was based on its health needs assessments.

She said before the project was carried out, WREP carried out needs assessment survey of Bwari in January.

FG to renew commitment on persons with disability policy