Kano to collaborate with CSOs on developmental projects 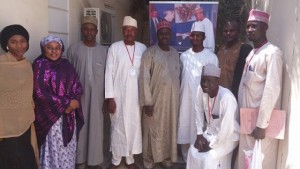 Kano state government will collaborate with Civil Society Organisations (CSOs), to bring development projects and programmes to people of the state.

Dr. Abdulhadi Chula said he visited the CHR office to see for himself the good work the organisation is doing in improving the lives of women and children.

“As such my office is for everyone and I cannot do it alone hence the need to go round all the NGO’s in the state and to seek for collaboration with relevant stakeholders in order to move the state
forward,” he said.

Earlier, while receiving the governor’s aide, Acting Executive Director of CHR, Salisu Muhammad Musa described the visit as first of its kind and commended the S.A for finding time to visit his office.

Salisu Musa called on the S.A to institute a mechanism in his office that will ensure that sustainability plan of Donors and Partners programs are in place and implemented in the state.

He said: “The mechanism should include local CSOs forum to be hosted by the S.A’s office for monitoring of the sustainability plan and the revival of the Kano Donor Coordination forum.”

Responding after the presentation, Dr. Chula appreciated the presentation commented, adding that his office will critically look at the issue of sustainability which he described as very important.

He further added that, the doors of his office are always open to accept constructive criticism, comments and observations from the CSOs to be channeled to the appropriate authorities.