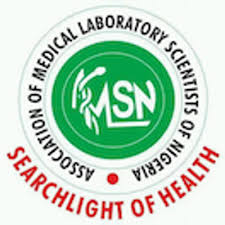 The Association of Medical Laboratory Scientists of Nigeria (AMLSN) has rejected a recent call by the Nigerian Medical Association (NMA) for the privatization and outsourcing of medical services in public hospitals.

AMLSN indicated in a jointly signed statement made available to newsmen in Jos, by its National President, Mr. Toyosi Raheem, and the General Secretary, Dr. Surajudeen Junaid.

The NMA had in an earlier statement, suggested that medical services, except those rendered by doctors should be outsourced.

NMA noted that Chief Medical Directors (CMDs) should explore the patronage of private outfits outside the hospitals for such services.

It suggested that services of medical laboratory scientists, radiographers, pharmacists, physiotherapists, nurses, among others, should be privatized.

AMLSN, however, rejected the suggestion, adding that the step would throw health services out of the reach of the common man.

“The step will increase the out-of-pocket health expenses of Nigerians, especially the poor masses and hinder universal health coverage, which is envisaged to be affordable, available and accessible to the citizenry,” the statement read.

The Lab scientists said the doctors’ position that such services be accessed through a Public-Private-Partnership (PPP) was “not out of genuine concerns for Nigerians.”

“If PPP policy is to be adopted, it should be in line with the guidelines of the Federal Government and must be for all professional services in the health sector, including the medical doctors. It should not be selective against a particular profession or group of professionals,” AMLSN said.

AMLSN also decried the implementation of the Yayale Ahmed’s Committee’s Report on the medical sector as being canvassed by the NMA.

It said the Yayale Ahmed’s Committee set up to resolve the disagreements in the health sector, had recommended the merger of some health professionals and specifically placed the medical laboratory scientists under the pathologists.

That recommendation had drawn the ire of scientists (AMLSN), who said that their profession was a distinct calling and should not be relegated as an appendage of the pathologists.

The Yayale Committee also recommended the formation of a Nigerian Medical Council to bring all health professionals under one umbrella to be headed by a medical doctor.

AMLSN said that each professional body in the health sector should be given its respect and be allowed to regulate its activities to optimize its contribution to health care delivery.