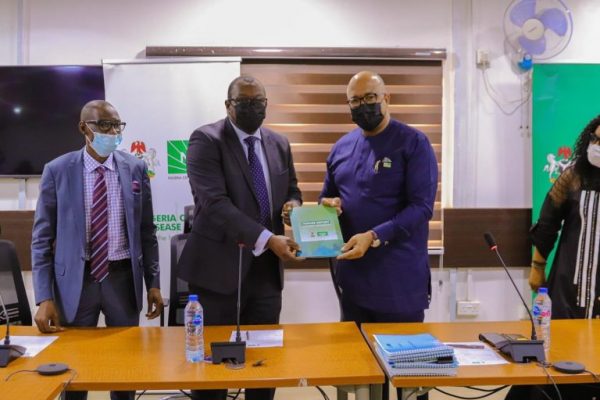 Dr Adetifa Ifedayo, has assumed office as the new Director-General of the Nigeria Centre for Disease Control (NCDC), following his appointment on September 6 by President Muhammadu Buhari.

He took over from Dr Chikwe Ihekweazu, who was appointed as Assistant Director General of the World Health Organisation (WHO) to head its new Pandemic Hub of Intelligence from November 1.

The official handover ceremony was witnessed by the Minister of Health, Dr Osagie Ehanire.

The ceremony was also used to celebrate the remarkable transformation journey of NCDC in implementing its 5-year strategic plan for national health security in line with its mandate to lead the preparedness, detection and response to public health emergencies.

Under the leadership of Ihekweazu from August 15, 2016, the agency has witnessed transformational growth from a young parastatal under the Federal Ministry of Health to a science-based institution leading the public health response to the largest pandemic in history.

According to Ihekweazu, despite the general pessimism at the ability of public institutions to deliver on the NCDC’s mandate, his vision was to build the confidence of Nigerians in the NCDC as the body established to protect the health of citizens.

He noted that his visionary leadership at NCDC had enabled the establishment of strategic partnerships and exponential investment in research, infrastructure and human capital development critical to strengthen Nigeria’s health security.

During this time of transformation, Ihekweazu said that there was no better person to lead the young agency than his successor.

“Dr Adetifa is a proven leader with strong epidemiology, academic and research background as well as the ability to bring people together.

“His vision for effective utilisation of scientific-evidence to prevent, detect and respond to public health emergencies is exactly what NCDC needs build on the gains achieved so far,” he added.

While accepting the baton of leadership from the outgoing NCDC director-general, Ifedayo declared his plans for the future with NCDC:

He started by congratulating Dr Chikwe Ihekweazu and the NCDC team for the, “incredible work being done thus far as well as the natural end of his leadership and the smooth transition process I have witnessed so far.

“For several years now, I have closely followed the activities of the agency without any knowledge of the possibility of ever leading it.

“My focus in the next few weeks is to work with colleagues to understand their work better so we can collectively build on the gains made so far, in line with the NCDC mandate.”