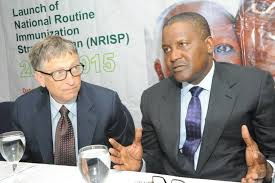 The Bill and Melinda Gates Foundation has awarded Katsina and Zamfara states government the sum of $1million each for the success recorded in polio eradication.

According to a statement signed by the Media Assistant to Governor Aminu Bello Masari and issued to newsmen, the award was announced in Abuja during the signing of the Memorandum of Understand (MoU) for routine immunization between the two states with Dangote and Bill and Melinda Gates Foundation.

The award was in recognition of the states relentless campaign against polio which led to the successful eradication of the disease in the two states.

The statement indicated that the states were awarded based on their commitment in the fight against polio.

Messrs Dangote and Gates said the states are worthy winners of the money because of their total commitment in the fight against polio in their respective states.

Nigerians, can we talk less and save more kids from dying?