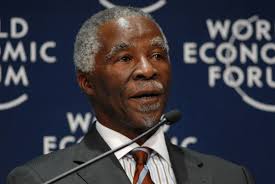 Former President of South Africa, Mr. Thabo Mbeki, has called on African countries to commence investigations on any of their citizens mentioned in the Panama Papers scandal.

Mr. Mbeki, who is currently Chair of Panel, Economic Commission of Africa, has in a statement titled, “Panama Papers: The AU/UNECA High Level Panel’s Warnings on Tax Evasion, Illicit Financial Flows and Tax Havens are Not Just another Recommendation!”, called on African countries to emulate the examples of countries like South Africa, Britain and France which have vowed to investigate any of their citizens mentioned in the Panama Papers.

The Panama Papers are an enormous leak of more than 11 million documents allegedly connected to a Panama law firm. According to the International Consortium of Investigative Journalists (ICIJ), the firm has helped establish secret shell companies and offshore accounts for the rich and the powerful globally.

Data from documents show that that the firm worked with more than 14,000 banks, law firms, company incorporators and other middlemen to set up companies, foundations and trusts for customers.

He said: “These investigations should not only be limited to the findings in the Panama Papers but should go further to uncover other possible destinations of the proceeds from tax evasion. The exposures contained in the Panama Papers is a massive blow to financial secrecy, which must be encouraged.

“Specific efforts must continue to put political pressure on the countries that enable a high level of financial opacity or that have laws enabling banking secrecy and the registration of shell companies. This is extremely important to all countries. Otherwise harmful tax practices and high levels of opacity in financial transactions as exposed by the Panama Papers will continue to be a scourge that we find ourselves discovering only when there are people bold enough to expose them.”

He further stated that the Panama Papers have highlighted issues that the African Union (AU) and the United Nations Economic Commission for Africa (ECA) High Level Panel (HLP) on Illicit Financial Flows (IFF) from Africa underscored in their findings in a report released and endorsed by African Heads of State and Government in January 2015.

“The staggering amount of illicit practices and the large number of global actors exposed by the Panama Papers demonstrate that governments of Africa and the rest of the world cannot avoid firm action against the tax havens and financial secrecy jurisdictions.

“The undeniable fact is that the illicit financial flows which derive from tax evasion deserve our full attention both continentally and globally. As revealed within the Panama Papers, the fourth most used tax haven by this firm is an African country.

Worse still, the reports show that this firm only knew the identities of the real owners of just 204 of 14,086 companies it had incorporated in this very country. Indeed, we must not rest under the illusion that the issue of tax havens does not directly affect Africa and the world at large,” Mbeki said.