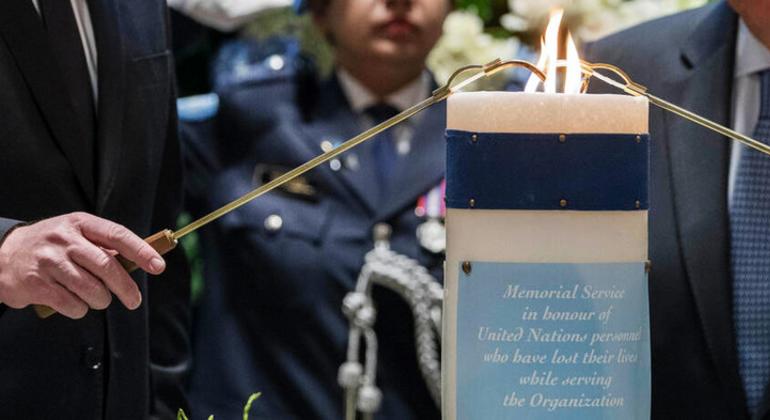 United Nations Secretary-General António Guterres has honoured the memory of 485 UN personnel who lost their lives in the line of duty in 2021.

The 485 personnel is the highest number of UN workers ever lost in a single year while serving the organisation.

“We are united in sorrow and solidarity,” said secretary-general, consoling the family members and loved ones, joining in the memorial event from all over the world, telling them: “our hearts are with you.”

He said throughout the past year, COVID-19 continued to cause immeasurable suffering and death.

The UN chief paid tribute to all colleagues who died in service in 2021, whether through malicious acts, natural disasters, or illness.

“Together, they represent the magnificent diversity of our United Nations family,” he said.

According to him, the personnel are from 104 nations, 70 military personnel, one a police officer and 414 civilian workers.

Guterres said their expertise and backgrounds were as diverse as the work they did across the UN Secretariat, agencies, funds, and programmes.

“Often far from home, without fanfare, they devoted their careers to help others.

“Unbowed by cynicism, they worked to make a difference – no matter how high the obstacle; no matter how distant the reward; no matter, even, how difficult the challenge,” he said.

“They worked to secure peace in forgotten places; fed the hungry; sheltered those driven from their homes; helped protect our planet; delivered life-saving assistance; and fought to give children a better future.

“In short, they upheld the vision and values of the United Nations,” the secretary-general declared. “We mourn their passing and cherish their memories,” he said.

After a moment of silent reflection on their lives and service, he spoke of a world in turmoil, “scarred by conflicts, threatened by crises and overwhelmed by emergencies.”

In hope of joining forces and working together as one international community, Guterres reminded that the UN is both “the instrument and the expression of that community.”

“It is the colleagues we honour today who embodied that promise and gave life to that hope,” he said.

The secretary-general pledged the support of the UN for the families of the fallen and to review and improve the safety, care, and wellbeing of its staff.

“We vow to carry on with the same dedication and courage that defined their work,” he said.

“Our colleagues lost their lives, but their spirit to help others lives on – today and every day,” the UN chief said, praying that their memory be a blessing and an inspiration to us all,” he said.