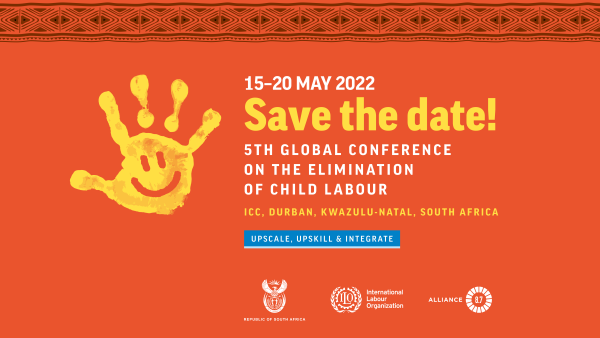 Countries taking part in the 5th Global Conference on the Elimination of Child Labour this week in South Africa, are being urged to do more to end child labour by 2025.

The strong call for urgent action at the conference taking place in Durban, aims to combat an uptick in the numbers of children being forced into work.

Latest figures indicate that 160 million children – almost one in ten worldwide – are still being affected. Furthermore, numbers are on the rise, with the pandemic threating to reverse years of progress, as child labour becomes a bigger scourge in particular among the vulnerable five to 11-year-old age group.

Speaking at the start of a week of hybrid format discussions, South African President Cyril Ramaphosa called on delegates to commit to taking “far-reaching actions” to make a difference in the lives of children.

“No civilization, no country and no economy can consider itself to be at the forefront of progress if its success and riches have been built on the backs of children.”

Mr. Ramaphosa’s call was echoed by Guy Ryder, Director-General of the International Labour Organization (ILO), who underlined that “child labour is a violation of a basic human right, and our goal must be that every child, everywhere is free from it. We cannot rest until that happens.”

According to the ILO, global progress against child labour has stalled for the first time in 2020, after two decades of moving in the right direction. In addition, the COVID-19 crisis is likely to have pushed millions more children into the workforce.

This is the first time the Global Conference on the Elimination of Child Labour is being held in Africa, a region where child labour numbers are highest, and progress has been slowest, ILO notes.

According to recent data, most child labour on the continent – some 70 per cent – is in the agricultural sector, often in settings where children are working alongside other family members.

The conference builds on four previous Global Conferences, held in Buenos Aires (2017), Brasilia (2013), The Hague (2010), and Oslo (1997), which raised awareness of the issue, assessed progress, mobilized resources, and established a strategic direction for the global movement against child labour.

With the 2025 UN Sustainable Development Goals deadline for the elimination of child labour looming, many speakers outlined the urgent need to recover the progress that had been made in many regions, prior to the COVID-19 pandemic.

The Conference is expected to conclude with a formal Call to Action that will outline concrete commitments to scale up action to eliminate child labour.