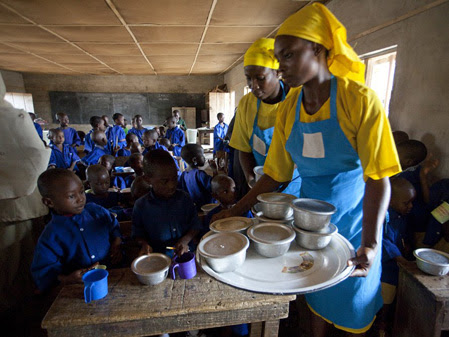 The Bill & Melinda Gates Foundation — the world’s largest private foundation — will spend $776 million over the next six years to fight malnutrition, a strong signal of support for a historically underfunded sector, according to the foundation’s leaders.

Co-chair Melinda Gates announced the new pledge — and its accompanying new program strategy — Wednesday at the European Development Days, the European Commission’s development forum held annually in Brussels, Belgium. In her remarks, Gates highlighted nutrition’s chronic underrepresentation in global development budgets and called on other donors to step up their own commitments.

“I know of no other problem in the world that does so much damage yet receives so little attention,” Gates said.

Undernutrition is responsible for more than one-third of global child deaths. One in 4 children are stunted due to malnutrition, which means their bodies and cognitive functions never fully develop.

In recent years — and particularly since the food price crisis in 2008 spurred a wave of global food shortages — health and development experts have raised louder and louder alarms about a global nutrition problem, and donors have begun to reorient programming with nutrition interventions in a more central role. Still, according to Gates, less than 1 percent of global foreign aid spending goes toward nutrition.

“We have been no different from most other funders. We never paid enough attention to nutrition. That is changing today,” Gates said Wednesday.

Gates added the foundation’s commitment will “unlock even further resources” from a matching pledge issued by the United Kingdom. At the Nutrition for Growth conference Britain hosted in 2013, the government committed to match every 2 pounds in new funding for nutrition with 1 pound of its own, up to a maximum 280 million pounds — roughly $430 million.

“We are planning to take advantage of that commitment today and we encourage other donors to take them up on the offer, too,” Gates said.

Is nutrition’s identity crisis over?

For years it has been both a blessing and a curse that nutrition programs operate at the intersection of a number of different sectors, Shawn Baker, the Gates Foundation’s director of nutrition, told Devex at the Global Food Security Symposium in Washington, D.C., in April.

Health, agriculture, education and others play roles in building working food systems that deliver nutritious commodities to communities. That means nutrition programs can be relevant components to a wide range of public services — and budget lines. Yet while these other sectors are likely to enjoy political leadership at the national level, a “ministry of nutrition” is not something countries typically establish.

“If you’re not very purposeful about making sure that nutrition is an explicit part of their mandate, agenda and accountabilities, then it always becomes a niche intervention instead of a mainstream intervention,” Baker told Devex.

Within the Gates Foundation’s own organizational structure, nutrition programs previously worked “opportunistically” at the intersections of other programmatic priorities.

“Institutional positioning matters at any organization,” Baker said, and the foundation has made moves to reposition the sector within its programming.

Nutrition was previously not a director-level position, and Baker described the foundation’s nutrition portfolio as “one of the smallest program strategies” — significant since Gates aligns its budgets against its strategies. That changed about 18 months ago when Baker and others undertook a process to scale up the foundation’s ambition for its nutrition programs, culminating with Wednesday’s announcement in Brussels.

“Malnutrition is a quiet catastrophe. You can’t see it in the same way you can see diarrhea or malaria or pneumonia, or the other health problems that poor children face,” Gates said.

In many countries stunting levels are so high it becomes the norm, Baker told Devex.

The new strategy will focus initially in five countries where there is “a particularly large burden of malnutrition” — Gates listed Nigeria as one country where the foundation will roll out its new programs — and around two major goals: to increase coverage of proven interventions and to develop new ones through investments in upstream research.

“I think that’s quite a big shift for the foundation,” he added.

Gates’ new strategy will also look to improve the evidence base for nutrition interventions through support for a forthcoming Lancet series on breast-feeding, for example. The foundation will continue to play an advocacy role, engaging both with international donors to prioritize investments in nutrition, and also with high-burden countries to ensure their own domestic resources target nutrition improvements.

“The end game is really that domestic resources need to take up more and more of the burden of addressing these problems,” Baker said.

Food security and nutrition will be on the agenda this weekend at the G-7 summit in Germany, and with one month remaining until the Financing for Development Summit in Addis Ababa, Ethiopia, Gates’ nutrition commitment, advocates hope, will be the first of many.