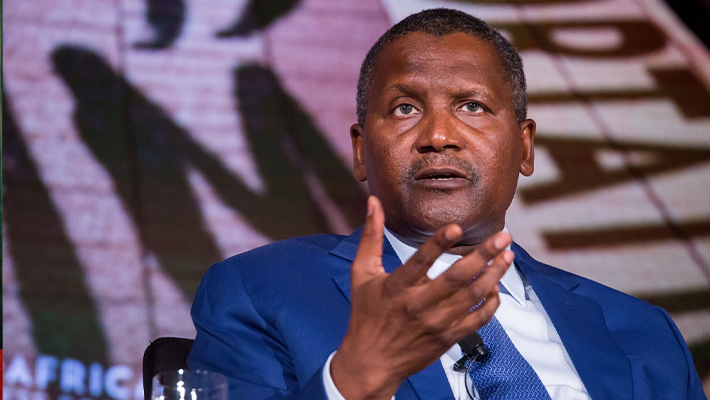 The President of the Aliko Dangote Foundation, Aliko Dangote has alerted that Nigeria may encounter scarcity in the supply of some food materials that are majorly imported from Russia and Ukraine in three months due to the ongoing war in the region.

Dangote stated this at the 4th Annual Nigerian Food Processing Nutrition Leadership Forum held in Lagos. The event also had in attendance the Minister for Health, Dr Osagie Ehanire; Minister of Budget, Finance and National Planning represented by the permanent secretary, Mrs. Olusola Idowu, Director General of NAFDAC, Prof. Mojisola Adeyeye among others.

However, responding to a question during the event, Dangote said that in the next three months, Nigeria might experience scarcity of wheat flour, maize flour and also fertilizers as Russia and Ukraine are the major suppliers of these food materials to Nigeria.

To prevent this unfavourable circumstance, Dangote called for a ban on maize exportation.

“The issue is that there will be a shortage of wheat and a lot of products because as we speak a lot of fertilizers are imported from these countries.

“There will be a scarcity of food because generally, people will not be able to access fertilizers going forward. We will not see the effect now but in the next two or three months, even the US will not be able to grow the same number of plants they did last year because of this.

“I agree with you that we need to sit down and have a discussion about this. Because right now you’ll start seeing people exporting maize which I think we need to stop so we don’t create shortages domestically and we really need to make sure that we grow more so that we don’t have a shortage of food.”

Also, speaking, the CEO of Flour Mills of Nigeria, Mr. Boye Olusanya called for urgent action to mitigate against this looming crisis noting that Russia and Ukraine are numbers one and five in wheat exportation in the world, noting that Nigeria relies heavily on them for the food products.

At the event, the Minister for Health, Dr. Ehanire, while speaking on the need for the fortification of staple food said it is essential to prevent diseases in citizens.

According to him, “Food fortification is a very important strategy because it is critical for the prevention of certain diseases.

“In the absence of certain nutrients, certain diseases can come up but are also important for health promotion to a healthier citizenry which is very important to human capital development. So, we shall do all that we can in the health sector to support initiatives to improve access to micronutrients and support the industry.”

He also called on the captains of industry to consider manufacturing these micronutrients locally while the ministry of finance works towards removing the import duty of these nutrients.

On her part, the DG of NAFDAC stated that the agency is working towards setting up fat and oil regulation body to tackle the challenges of trans fat in the country adding that one of the duties of the regulation agency would be “to ensure that we are very sensitised to the damage that the trans fat can have on the cardiovascular system.”