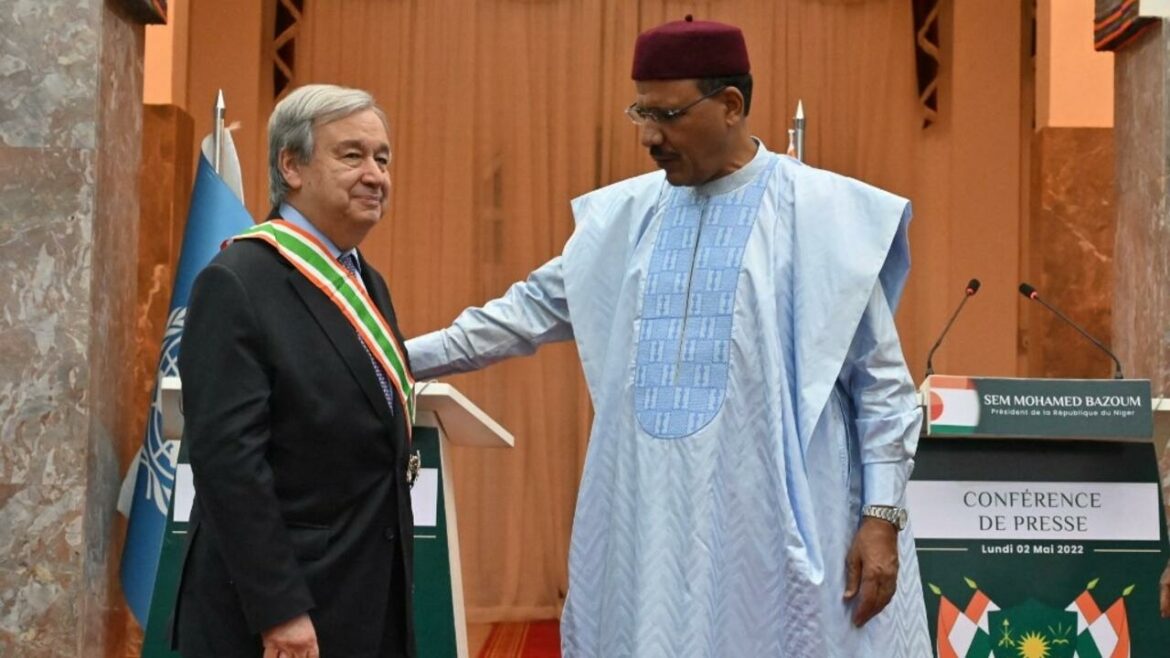 United Nations Secretary-General, António Guterres has called for more resources to fight terror attacks in Africa’s Sahel, as the number of attacks in the region continues to increase.

Guterres, who made the call in Niamey, the capital of Niger Republic on Monday, said that the international community should realise that terrorism is not just a regional or African issue, but one that threatens the whole world.

Speaking after meeting the President of Niger, Mohamed Bazoum, the UN chief reiterated his call for more resources to tackle the problem.

He said that peace, stability and prosperity in Niger and across the Sahel remained absolute priorities for the United Nations.

Bazoum recognised Guterres’ commitment to finding a solution to the problem of terrorism, saying that it is dynamic and has evolved and needed response.

Meanwhile, the former President of Niger, Mahamadou Issoufou, agreed to a request from the African Union Chairperson and the UN Secretary-General.

Issoufou agreed to the request to lead an African Union (AU)-UN Joint Strategic Assessment on security in the Sahel, focusing on developing recommendations on how to strengthen the overall international response to the security crisis in the Sahel.

The assessment will be undertaken in consultation with the Economic Community of West African States (ECOWAS) and the Group of Five (G5) Joint Secretariat.

The UN says that insecurity in Niger is being driven by a number of different actors and as the UN Chief noted “civilians are often the first victims” when violence strikes.

Figures suggest that almost eight out of 10 victims of attacks are civilians.

A range of extremist armed groups are operating mostly in the regions of Tillabéri, Tahoua and Diffa in the northwest, south and southeast of the country respectively.

In the Maradi region in the south, armed groups operating from Nigeria frequently cross the border to carry out raids; bandits with weapons within Niger are also a significant threat.

In 2021, the Global Terrorism Index attributed 588 deaths in Niger to terrorism, the highest terror-related death toll in the last decade. In Tillabéri region, deaths more than doubled between 2020 and 2021.

According to him, climate change, increased food insecurity, malnutrition and record high food prices, fuelled by the war in Ukraine have all contributed to unprecedented humanitarian needs.

The UN says the number of acutely food insecure people has more than doubled since 2020 and is estimating that 15 per cent of Niger’s population of 25 million will require humanitarian assistance in 2022.

In a country where 80 per cent of the population depend on agriculture for their livelihoods, insecurity and changes to the climate have contributed to their inability to feed themselves.

The 2019 Human Development Index which measures life expectancy, education and income indicators, ranked Niger as the least developed of the 189 countries in the list.

In spite of the many challenges Niger faces, the secretary-general told the media in Niamey that there was still hope.

Guterres said that the UN must live up to that hope and support young Nigeriens, especially women to access opportunities to create a better future.

Niger is the second of three countries Guterres is visiting on a tour of West Africa to mark the Muslim holy month of Ramadan.

Guterres had visited Senegal on Saturday and he is expected to be in Nigeria on Tuesday.

Immunisation: No one should die from preventable diseases – Prof. Nasidi