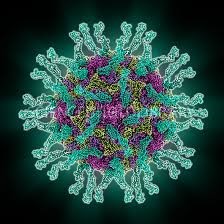 Although many of us know about Polio, some of us know little about the virus and how it goes about causing damage to our lives. This time I would like to enlighten us on what we know, but not too much knowledgeable about. Polio virus is the major and only cause of poliomyelitis. It is a very complicated virus and hard to eradicate especially here in Africa where sanitation and hygiene is poor.

Polio (poliomyelitis) is a highly infectious viral disease passed from person to person. It invades the nervous system and can paralyze a person within hours. It mainly affects children under 3 years. Polio usually comes in two forms which is the non-paralytic polio and the paralytic polio. Although polio can cause paralysis and death, the vast majority of people who are infected with the poliovirus don’t become sick and are never aware they’ve been infected with polio. This virus has been among us for centuries but thankfully it is in the verge of being eradicated.

The poliovirus lives only in humans and gets excreted in feaces of someone who’s infected. Poliovirus spreads primarily through the fecal-oral route, especially in areas where sanitation is inadequate.

Poliovirus can be transmitted through contaminated water and food or through direct contact with someone infected with the virus. Polio is so contagious that anyone living with a recently infected person is likely to become infected, too. People carrying the poliovirus can spread the virus for weeks in their feces.

Some people who develop symptoms from the poliovirus contract nonparalytic polio — a type of polio that doesn’t lead to paralysis (abortive polio). This usually causes the same mild, flu-like signs and symptoms typical of other viral illnesses.

Signs and symptoms, which generally last 1 to 10 days, include:

In rare cases, poliovirus infection leads to paralytic polio, the most serious form of the disease. Paralytic polio has several types, based on the part of the body that’s affected; the spinal cord (spinal polio), the brainstem (bulbar polio) or both (bulbospinal polio).

Doctors often recognize polio by symptoms, such as neck and back stiffness, abnormal reflexes, and difficulty swallowing and breathing. To confirm the diagnosis, a sample of throat secretions, stool or cerebrospinal fluid; a colorless fluid that surrounds the brain and spinal cord is check for the presence of poliovirus.

Because no cure for polio exists, the focus is on increasing comfort, speeding recovery and preventing complications. Supportive treatments include:

You’re at greatest risk of polio if you haven’t been immunized against the disease. In areas with poor sanitation and sporadic or nonexistent immunization programs, the most vulnerable members of the population — pregnant women, the very young and those with weakened immune systems — are especially susceptible to experience paralysis if they are infected with poliovirus.

These factors also increase your risk if you haven’t been vaccinated:

Although improved public sanitation and careful personal hygiene may help reduce the spread of polio, the most effective way to prevent the disease is with polio vaccine.

Currently, most children get four doses of inactivated poliovirus vaccine (IPV) at the following ages:

Ministers of Health; commit to deliver on Immunization